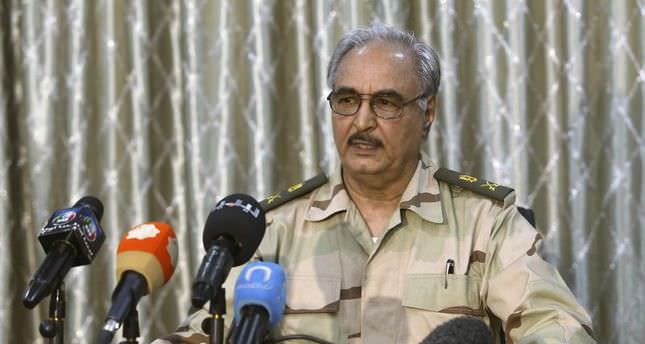 by Aug 19, 2014 12:00 am
Libyan militiamen fired rockets into an affluent district of Tripoli early on Tuesday, moving a battle with a rival armed faction closer to the centre of the capital after fighters on one side came under air attack.

Rebel factions who united to topple Muammar Gaddafi in 2011 have since turned their guns on each other, spreading anarchy in oil-producing Libya and raising fears it may become a failed state destabilising the wider North and West African region.

An air force controlled by renegade General Khalifa Haftar were responsible for strikes on the militia in Tripoli on Monday, one of his commanders said, after weeks of fighting for the capital and its airport.

Hours later after nightfall, unidentified militiamen fired Grad rockets into the Hay Andalus and Gargaresh districts, among the most well-to-do in Tripoli, killing three people, residents said. A health ministry official had no casualty figures.

The neighbourhoods, home to the Libyan bourse, elegant cafes and foreign brand outlets such as Nike or Marks & Spencer, had been buzzing with shoppers until recently.

The air attacks escalated a struggle between militias as well as between forces from different cities all vying for power and spoils in the OPEC-member nation.

Tripoli has largely slipped out of control of the government with senior officials working from Tobruk in the far east, where the new parliament has based itself to escape street fighting in Libya's two biggest cities Tripoli and Benghazi.

Libya's central government lacks a functioning national army and relies on militias for public security. But while militias get state salaries and wear uniforms, they report in practice to their own commanders and towns such as Misrata or Zintan.

The situation in Tripoli has been exacerbated by a separate showdown between Haftar's forces and others in the eastern port city Benghazi.

Neither the Zintan nor Misrata militia is believed to have warplanes, while the Libyan state's jet fighters were destroyed or damaged during the 2011 civil war in which NATO warplanes backed up the anti-Gaddafi uprising.

Western powers have said they had no role in Monday's air strikes.

On Sunday, the United Nations Mission in Libya bemoaned the lack of response to "repeated international appeals and (our) own efforts for an immediate ceasefire". The new U.N. special envoy, Bernardino Leon is due to start his job on Sept. 1 but said he might travel to Tripoli as early as this week.