UK condemns murder of US journalist 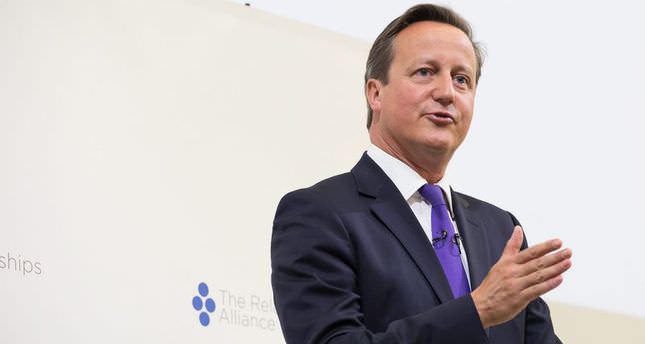 by AA Aug 20, 2014 12:00 am
British Prime Minister David Cameron has condemned a video showing the beheading of an American journalist seized in Syria two years ago as "deeply shocking."

"It is an act of murder, and murder without any justification," Cameron said on Wednesday.

The United States National Security Council has confirmed that the images are authentic.

The video showed 40-year-old James Foley dressed in an orange jump suit kneeling down in desert terrain. His killer blamed U.S. involvement in Iraq before cutting into Foley's neck.

The killer appeared to speak in an English accent, raising fears that he may have been one of 400 British Muslims the U.K. government suspects have travelled to Syria to join militant groups, including ISIS.

Cameron said the killer had not been identified but noted it was "increasingly likely" that the man was British. Britain will "redouble" its efforts to stop people travelling to Syria and Iraq to take part in "extremism and violence," he added.

He said: "We're absolutely aware that there are significant numbers of British nationals involved in terrible crimes, probably in the commission of atrocities, making jihad with ISIS and other extremist organizations.

"Many of these people may seek at some point to return to the U.K. and they would then pose a direct threat to our domestic security."

Foley had been missing since November 2012, when he was seized by armed men. He had previously covered conflicts in Iraq, Afghanistan and Libya, where he was also captured and held for 44 days in 2011.

He was one of two journalists believed to be held by IS. Fellow American Steven Sotloff appearing at the end of the beheading video to say his life depended on U.S. President Barack Obama's response.

In the video, titled A Message to America, Foley is shown reading a message addressed to his brother - supposedly serving in the U.S Air Force - stating that U.S. air strikes in Iraq were the reason for his death.

"When your colleagues dropped that bomb, they signed my death certificate," Foley said.

Dressed in black with his face covered, Foley's killer said: "Any attempts from you, Obama, to deny Muslims their safety of living under the caliphate will result in the bloodshed of your people."

Foley's mother Diane said in a statement on Wednesday that she had never been prouder of her son: "He gave his life trying to expose the world to the suffering of the Syrian people. We implore the kidnappers to spare the lives of the remaining hostages. Like Jim, they are innocents. They have no control over American government policy in Iraq, Syria or anywhere in the world."