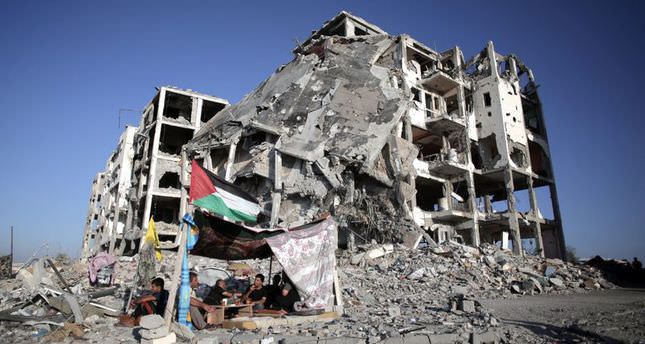 by Associated Press
Aug 21, 2014 12:00 am
An Israeli airstrike in Gaza killed three senior leaders of the Hamas military wing on Thursday, the group said.

The strike near Rafah, a town in the southern part of the coastal territory, was one of 20 the Israeli military said it carried out after midnight on Wednesday.

In a text message sent to media, Hamas said three of its senior military leaders Mohammed Abu Shamaleh, Mohammed Barhoum and Raed al-Attar were killed, along with three other people.

Gaza police and medical officials said scores more people remained under the rubble of a four-story structure destroyed in the airstrike.

The three Hamas leaders are considered to be at the senior levels of its military leadership and were involved in a number of high profile attacks on Israeli targets.

The Israeli security agency Shin Bet confirmed the deaths of Shamaleh and al-Attar in an email, but did not mention Barhoum.

The strikes followed the breakdown of Egyptian-mediated talks in Cairo aimed at producing a long-term truce and a future roadmap for Gaza after more than a month of fighting between Israel and Hamas.

The Gaza war has so far killed more than 2,000 Palestinians, mostly civilians. Israel has lost 67 people, all but three of them soldiers.

Palestinian health official Ashraf Al-Kidra put the number of those missing at the site of eh Rafah airstrike in the "dozens."

Elsewhere, another Israeli airstrike killed a 27-year-old man in central Gaza identified as Jomma Anwar Mayar, police said. Israel also hit at smuggling tunnels along the Gaza border with Egypt and at agricultural lands west of Rafah in the latest airstrikes.

Israel says the airstrikes are in response to a resumption of Hamas rocket fire that on Tuesday scuttled a six-day cease-fire. The military says that only one rocket launch was registered since midnight, compared to more than 210 over the previous 30 hours.

On Wednesday, in the most spectacular Israeli strike since the cease-fire was breached, Hamas' military chief, Mohammed Deif, was the object of an apparent assassination attempt that killed his wife and infant son.

After remaining quiet for most of the day Wednesday, Hamas officials announced that Deif was not in the targeted home at the time and was still alive. Deif has survived multiple assassination attempts, lives in hiding and is believed to be paralyzed from previous attempts on his life.

"We are determined to continue the campaign with all means and as is needed," he said, his defense minister by his side. "We will not stop until we guarantee full security and quiet for the residents of the south and all citizens of Israel."

The Egyptian Foreign Ministry expressed "deep regret" over the breaking of the cease-fire. It said in a statement Wednesday that it "continues bilateral contacts" with both sides aimed at restoring calm and securing a lasting truce that "serves the interest of the Palestinian people, especially in relation to the opening of the crossings and reconstruction."

An Egyptian compromise proposal calls for easing the Gaza blockade but not lifting it altogether or opening the territory's air and seaports, as Hamas has demanded.

While the plan does not require Hamas to give up its weapons, it would give Western-backed Palestinian President Mahmoud Abbas, whose forces were ousted by Hamas, a foothold back in Gaza running border crossings and overseeing internationally backed reconstruction.

The Gaza blockade has greatly limited the movement of Palestinians in and out of the territory of 1.8 million people, restricted the flow of goods into Gaza and blocked virtually all exports.

Israel says the blockade is needed to prevent Hamas and other groups from getting weapons. Critics say the measures amount to collective punishment.