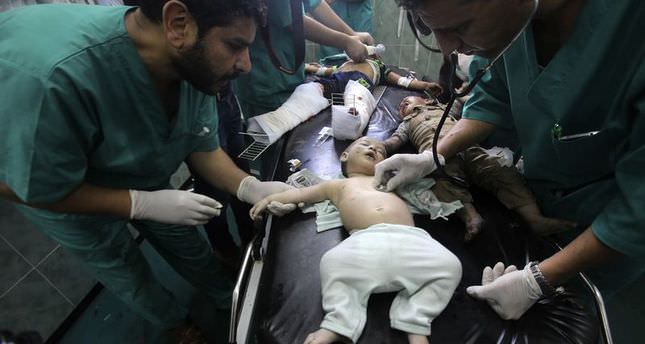 by AA Aug 21, 2014 12:00 am
Four Palestinians, including three Palestinian children, were killed in a fresh Israeli airstrike in the Gaza Strip on Thursday, according to a Health Ministry spokesman.

"The three children, aged 7, 8 and 11, were killed in an Israeli strike in eastern Gaza City," Ashraf al-Qodra told Anadolu Agency.

"A 35-year-old man was also killed in the Israeli raid", he said.

The latest fatalities bring to 17 the number of Palestinians killed in Israeli attacks on the Gaza Strip on Thursday.

Israel has been pounding the Gaza Strip since Tuesday following the collapse of a temporary ceasefire with Palestinian factions.

On Thursday, three commanders of the Ezzeddin al-Qassam, the armed wing of Palestinian faction Hamas, were killed in an Israeli airstrike in the southern Rafah city.

Israel accuses Palestinian factions of violating the ceasefire, a claim denied by Hamas, which accuses the self-proclaimed Jewish state of derailing efforts aimed at reaching a permanent ceasefire deal.

Since hostilities began on July 7, at least 2064 Palestinians have been killed and more than 10,000 others injured in relentless Israeli attacks on the Gaza Strip, according to the Palestinian Health Ministry.

According to Israeli figures, at least 67 Israelis-64 soldiers and three civilians-have been killed.