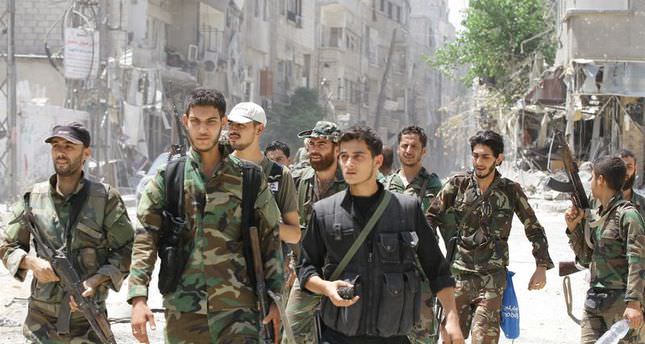 by Associated Press Aug 21, 2014 12:00 am
Syrian troops killed dozens of ISIS militants, including a prominent media activist, in heavy clashes on Thursday around a sprawling northern air base that the ISIS is trying to seize, activists and state media said.

ISIS militants began a long-anticipated offensive on Wednesday to seize Tabqa air base in the northern province of Raqqa, the last poserition held by the Syrian government in a province that is a stronghold of the al-Qaida breakaway group.

The assault on the Tabqa air base had been expected for weeks. ISIS militants have tightened their siege of the military facility in recent days, capturing a string of nearby villages.

Syria's state news agency SANA quoted an unnamed military official as saying that "large numbers of terrorists were wiped out" near the air base. The Britain-based Syrian Observatory for Human Rights says the death toll among ISIS militants is at least 11 and possibly as many as "tens."

Beirut-based Al-Mayadeen TV said more than 150 members of the ISIS were killed in an ambush near the air base. Al-Manar, a network run by the Lebanese Hezbollah, which is a close ally of the Syrian government, gave a similar number.

The Raqqa Media Center, an activist collective, reported fierce clashes around the facility accompanied by government airstrikes. It said a prominent ISIS media activist known as Abu Moussa, who appeared in a recent Vice News documentary about the group, was among those killed. It said that another media activist, Abu Abdullah al-Ansari, was also killed.

The Observatory, which relies on a network of activists inside Syria, confirmed Abu Moussa and al-Ansari's deaths.

The Observatory said the ISIS launched two suicide attacks on Wednesday but failed to break into the air base. The Observatory's chief Rami Abdurrahman said ISIS militants attacking the air base are led by Omar al-Shishani, one of the group's most prominent military figures.

The air base is one of the most significant military facilities in the area, containing several warplanes, helicopters, tanks, artillery and ammunition.

Last month, ISIS militants overran the Division 17 military base in Raqqa, killing at least 85 soldiers. Two weeks later, the extremists seized the nearby Brigade 93 base after days of heavy fighting.

Since July, following their blitz across Iraq and after they declared a self-styled caliphate straddling the Iraq-Syria border, ISIS militants have methodically picked off isolated government bases in northern and eastern Syria, killing and decapitating army commanders and pro-government militiamen.