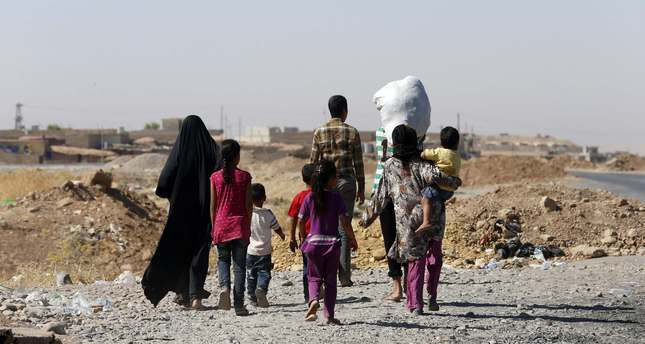 by Aug 22, 2014 12:00 am
About 700,000 Iraqis have gathered in the Kurdish north after being driven from their homes by ISIS fighters, the United Nations said Friday as it stepped up a massive aid operation to the region.
"The Kurdistan region of Iraq is now hosting close to 700,000 displaced Iraqis, most having arrived in early June," Adrian Edwards, spokesman for the UN's refugee agency, told reporters in Geneva.
Earlier this week, the UNHCR had put the number at around 600,000, but it is unclear how many of the additional 100,000 were new arrivals and how many had arrived earlier but only been registered in recent days.
"There has been some increase in numbers, but we haven't finished registration at the moment," Edwards said.
The UNHCR was continuing its largest single aid push in more than a decade following the first aid flight to northern Iraq two days ago.
Edwards said a second Boeing 747 had delivered more tents to the regional capital Arbil on Thursday and that more flights were planned Friday and Saturday.
The planned 10-day operation aims to bring a total of 2,410 tonnes of aid by air, land and sea.
"Inside Iraq, shelter remains a top priority for displaced people, too many of whom are living in woeful conditions," Edwards said, adding that hundreds of thousands of people were living in unfinished buildings, mosques, churches, parks and schools.
He said displaced Iraqi's were moving to camps "as quickly as tents can be pitched, such is the enormity of this crisis and the desperate need for shelter."
Looking beyond the emergency aid operation, the UN is bracing to continue its mission there "for a long time to come," Edwards said, adding that planning for the coming winter was a priority.
Militants from the ISIS group, which had already occupied parts of Syria, launched an offensive in Iraq in June and rapidly seized much of its Sunni heartland.
The ISIS militants, who are accused of multiple acts of summary execution, rape and other atrocities, have declared a "caliphate" in a region straddling the Iraq-Syria border, and have taken Iraq to the brink of breakup.
Many of those fleeing have found a haven in Iraq's autonomous Kurdistan region, whose fighters have provided a bulwark against the militants.
Last Update: Aug 22, 2014 4:21 pm
RELATED TOPICS