A year after chemical attacks, no way to reach justice 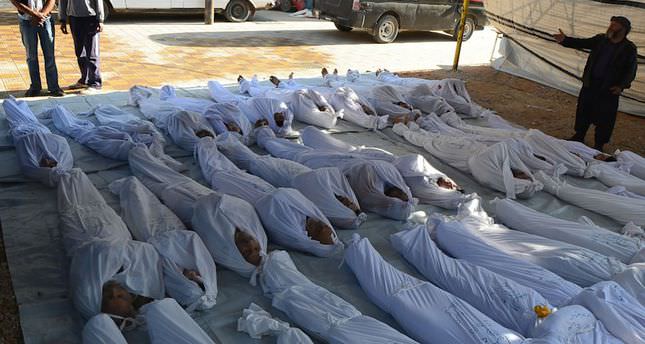 by Daily Sabah Aug 22, 2014 12:00 am
On Aug. 21, 2013, the regime of Syrian president Bashar Assad killed dozens in rebel-held areas in the suburbs of Syria's capital, Damascus, by attacking with chemical weapons. The fired rockets were carrying the nerve agent sarin. The U.N. described the attacks as the worst chemical weapon use in the 21st century. U.S. President Barack Obama threatened to carry out punitive airstrikes against the Syrian government, touching off a flurry of diplomacy that eventually resulted in al-Assad accepting a U.S.-Russia brokered deal to relinquish his chemical arsenal. U.N. inspectors conducted a swift investigation that determined rockets loaded with sarin had been fired from an area where the Syrian military has bases.

Over the past 11 months, a joint mission by the U.N. and the Organization for the Prohibition of Chemical Weapons (OPCW) has overseen the removal of Syria's entire declared chemical stockpile of 1,300 metric tons (1,430 tons) from the country. More than 80 percent of those materials, which include mustard gas and precursors to sarin, have been destroyed so far, according to the OPCW. Yet, another type of chemical weapons have totally been destroyed. Although the world condemned the Assad regime, even U.N. inspectors were not authorized to declare who was officially responsible.

According to activists, the regime continued using chemical weapons, and still holds a big amount of the similar weapons. The families of the victims and the wounded people who were directly affected by the chemicals have no opportunity to apply an institution for further investigation and punishment of those responsible, according to the activist. The war fiercely continues as the regime and the intra-opposition clashes cause death and destruction. According to the Britainbased Syrian Observatory for Human Rights Organization, the regime troops killed 46 people yesterday. The three-year long civil war left more than 170,000 people dead and displaced millions of people.
Last Update: Aug 22, 2014 1:08 am
RELATED TOPICS