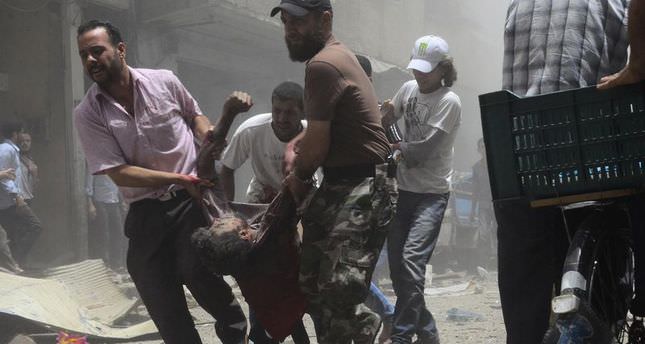 The figure, covering the period from March, 2011, to April, 2014, is the first issued by the UN's human rights office since July, 2013, when it documented more than 100,000 killed.The high death toll is a reflection of the brutality of Syria's conflict, which has transformed into a complex, multilayered war where various factions fight against each other.

It also reflects the recent surge in deadly attacks by the al-Qaeda-breakaway ISIS group targeting rival militant groups, mainstream Western-backed Syrian rebels and Kurdish militiamen in northern Syria as it seeks to eliminate opponents and consolidate its hold on territory and resources.

Navi Pillay, the UN's top human rights official who oversees the Geneva-based office, said the new figures are so much higher because they include additional killings from earlier periods, as well as deaths since the last report. The exact figure of confirmed deaths is 191,369, Pillay said.

"As the report explains, tragically it is probably an underestimate of the real total number of people killed during the first three years of this murderous conflict," she said.

Men comprised 85 per cent of the victims, women more than 9 per cent, while the sex was unknown in the remaining cases.

The records show at least 8,800 child victims, although the age of most victims is unknown.

Pillay criticized the world's "paralysis" over the fighting in Syria, which "has dropped off the international radar" in the face of so many other armed conflicts around the world. Her spokesman, Rupert Colville, told reporters she was referring mainly to the standoff on the UN Security Council.

Russia has been one of Syrian President Bashar al-Assad's main allies and has used its veto power four times at the 15-nation Security Council to prevent international sanctions on Syria.

In January, Pillay's office said it had stopped updating the death toll, blaming the organization's lack of access on the ground in Syria and its inability to verify source material. It was unclear why it has released new figures now.

The UN also would not endorse anyone else's count, including the widely quoted figures from the Britain-based Syrian Observatory for Human Rights, which has closely counted the deaths since Syria's crisis began. On Thursday, that body said the number of deaths has reached 180,000.
Last Update: Aug 22, 2014 4:19 pm
RELATED TOPICS