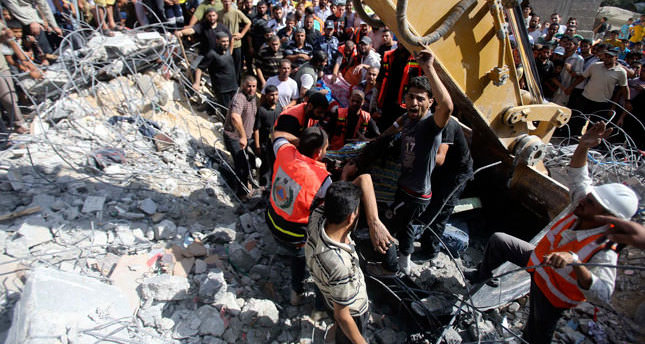 by Daily Sabah Aug 22, 2014 12:00 am
Scenes of devastation still continue in the Gaza Strip after Israeli army resumes strikes. Israeli warplanes continued to pound Gaza on Thursday, killing four Palestinians in a heavy strike on a graveyard in the beleaguered region. The Israeli raid hit a graveyard in Sheikh Radwan in northern Gaza City where people were gathered for a funeral. The Israeli army claimed that six militants, who were laying the ground work to launch rockets, were targeted. However, it did not give any additional information about whether the militants prepared rockets around the same graveyard that was struck by the Israeli army.

The conflict between Israel and Hamas has intensified after three top Hamas commanders; Mohammed Abu Shamala, Raed al-Atar and Mohammed Barhum, were killed in the bombing of a house in the southern town of Rafah on Thursday. "The assassination... is a big Israeli crime, which will not succeed in breaking our will or weakening our resistance," Hamas spokesman Sami Abu Zuhri said in a statement, adding that "Israel will pay the price," as AFP news agency reported. The latest Israeli strike targeting Hamas senior figures is a strong indication that Israel, whose main objective is to get Gaza to demilitarize, is determined to eliminate Hamas' "military leadership."

After the collapse of the temporary cease-fire, Israel had primarily targeted Hamas military leader Mohammed Deif 's house in northern Gaza on Wednesday. However, its attempt failed to assasinate the Hamas chief but did kill his wife and two of his children. This was "the sixth time Israel has tried and failed to kill him."

Meanwhile, Israel has called up 10,000 army reservists as part of an extended ground offensive against the Gaza Strip. Since the start of the operation in the Palestinian territory, Israel had deployed 27,000 reservist troops, then withdrew them from the Gaza Strip.

As Israeli jets fired at 20 targets in the Gaza Strip on Wednesday night and continued to kill more unarmed Palestinians, the U.N. Security Council urged both sides to continue the peace talks in Cairo and "urgently reach a sustainable and lasting cease-fire," in order to prevent the hostilities between two sides. During the 10-day period of calm, the peace talks stalled with no significant progress to reach a longterm cease-fire agreement for a definitive end to the four-week long Gaza war. Both sides have engaged in the indirect talks mediated by Egypt.

Following the failure of Egyptian-brokered talks late Tuesday, Israeli resumed its deathly assault on Gaza, killing at least 29 Palestinians, including several children and injuring 120. After the Israeli military operation resumed, the Palestinian death toll has risen to 2,054, including 553 children and 253 women, since the launch of Israel's "Operation Protective Edge" on July 7, according to a statement given by Palestinian Health Ministry.
Last Update: Aug 22, 2014 9:42 am
RELATED TOPICS