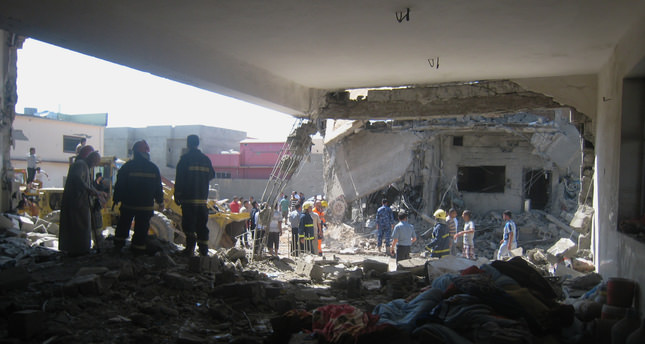 by Aug 23, 2014 12:00 am
Bombings in Baghdad and the northern city of Kirkuk killed at least 30 people in Iraq on Saturday as the government investigated a deadly attack on a Sunni mosque the day before that has heightened sectarian tensions amid a fragile political transition.

One witness said he heard "an explosion between the cars, and then we started carrying out the dead bodies from there while people were burning inside the shops and cars." The witness asked not to be named for fear of retribution.

In Baghdad, a suicide bomber had earlier driven an explosives-laden car into the gate of the intelligence headquarters in Karrada district, killing six civilians and five security personnel, a police officer said. He said 24 other people were wounded.

A medical official confirmed casualty figures. Both officials spoke on condition of anonymity as they were not authorized to brief the media.

The attacks came after parliament speaker Salim al-Jabouri said that a committee of security officials and lawmakers were probing Friday's attack against a village mosque in Diyala province, northeast of the capital, which killed more than 60 people. The results of the investigation are expected in two days' time.

It remained unclear whether the attack in the village of Imam Wais was carried out by Shiite militiamen or insurgents from the ISIS group who have been advancing into mixed Sunni-Shiite areas in Diyala and have been known to kill fellow Sunni Muslims who refuse to submit to their harsh interpretation of Islamic law.

Since early this year, Iraq has faced an onslaught by the ISIS extremist group and allied militants, who have seized large areas in the country's west and north. The group took over Iraq's second-largest city Mosul in June, and has since declared an Islamic state, or caliphate, in territory under its control in both Iraq and neighboring Syria.

Local security officials in Diyala said Friday's attack began with a suicide bombing near the mosque entrance. Gunmen then stormed the building and opened fire on worshippers. At least 64 people were killed, including four Shiite militiamen who stumbled upon bombs planted by the militants as they rushed to the scene with security forces.

Sunni lawmakers offered a different account, saying Shiite militiamen had launched a reprisal attack on the mosque after their convoy was bombed.

The attack led two major Sunni parliamentary blocs to pull out of talks on forming a new government. The move creates a major hurdle for Shiite prime minister-designate Haider al-Abadi as he struggles to reach out to Sunnis to form a government by Sept. 10 that can confront the Islamic State extremists.

In a press conference, al-Jabouri did not say who might have been behind the attack, saying only that such violence was "carried out by the same hands (of those) who want to derail the process of building the government."

Al-Jabouri heads one of the blocs that suspended talks, but he declined to comment on the move at the press conference, saying he was there in his capacity as parliament speaker. Al-Abadi issued a statement late Saturday calling upon all political blocs to submit their nominations for ministerial positions in the new government.

Imam Wais village is located about 75 miles (120 kilometers) northeast of Baghdad in the ethnically and religiously mixed Diyala province, which saw heavy fighting at the height of Iraq's sectarian conflict in 2006 and 2007.

Firat al-Tamimi, a Diyala lawmaker, said there are conflicting accounts surrounding Friday's events. He confirmed, however, that there was a bombing near the mosque prior to the assault on worshippers.

The leader of one of the country's largest Shiite militias on Saturday denied any role in the attack.
Three near-simultaneous car bombs exploded in the northern Iraqi city of Kirkuk on Saturday, killing 15 people and wounding 60, police and a doctor said.

Two of the bombs exploded near under-construction buildings used as observation positions by security forces, while the third struck the entrance to a market.
Last Update: Aug 24, 2014 10:24 am
RELATED TOPICS