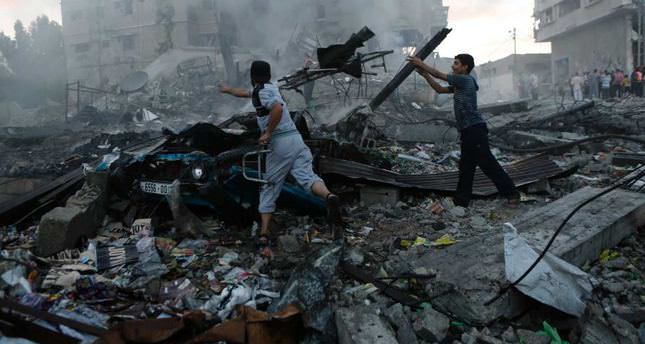 by Daily Sabah Aug 23, 2014 12:00 am
Israel continues to pound the Gaza Strip, killing four Palestinians on Friday. The Palestinian death toll from the ongoing Israeli attacks on the Gaza Strip has risen to 2,091 following the failure of Egyptianbrokered talks late Tuesday. Israel has still targeted civilian residential areas with Israeli planes striking a Palestinian house in western Gaza City on Friday.

Since the collapse of a temporary cease-fire with Palestinian groups in the enclave on Tuesday, the Israeli military hit 160 targets in the besieged enclave. The Israeli military also stated that it will continue military operations to target Hamas militants in Gaza and destroy their infrastructure with the sole aim of demilitarizing the Palestinian territory.

At least 50 targets were hit by Israel on Thursday alone, Anadolu Agency (AA) reported. Israeli ground troops were also deployed along the border with Gaza for an extended ground offensive.

Since the start of the operation in the Palestinian territory, Israel has deployed 27,000 reserve troops, and then withdrew them from the Gaza Strip. A day after three top Hamas commanders were killed in the bombing of a house in the southern town of Rafah in the Gaza Strip, Hamas gunman executed 18 Palestinians accused of collaborating with Israel. According to Hamas security officials, seven people were shot dead in front of worshippers outside a mosque in one of Gaza's main squares. Another 11 Palestinians were also killed at an abandoned police station near Gaza City.

The reports stated that this was "the first public executions in the Palestinian enclave since the 1990s." "The resistance has begun an operation called 'strangling the necks,' targeting collaborators who aid the [Israeli] occupation, kill our people and destroy houses," a pro-Hamas website said, according to Reuters news agency. "We demand the Palestinian National Authority and the [Palestinian] resistance to intervene to stop these extra-judicial executions, no matter what the reasons or motives are," Raji al-Surani, the chairman of the Palestinian Center for Human Rights in Gaza, said in a statement denouncing the killings.

After the collapse of the temporary cease-fire, violence between Israel and Hamas flared up again. Israel had primarily targeted Hamas military leader Mohammed Deif 's house in northern Gaza on Wednesday. However, its attempt failed to assassinate the Hamas chief but did kill his wife and two of his children. This was "the sixth time Israel has tried and failed to kill him."

In addition, Mohammed Abu Shamala, Raed al-Atar and Mohammed Barhum were the highest-ranking militants to be killed in the six-week Gaza war. Israeli attacks targeting senior Hamas figures was a strong indication that Israel, whose main objective is to demilitarize Gaza, is determined to eliminate Hamas's "military leadership."
Last Update: Aug 23, 2014 1:14 am
RELATED TOPICS