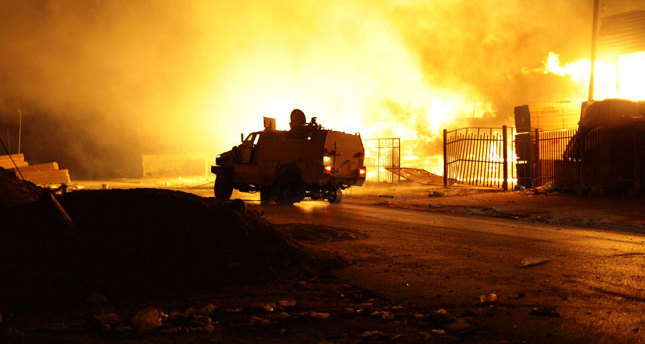 by Daily Sabah Aug 25, 2014 12:00 am
Unidentified military aircraft attacked targets in the Libyan capital, Tripoli on Sunday, hours after militants declared that they seized the main airport. Tripoli residents heard jets, followed by explosions at dawn, but no further details were immediately available. In recent weeks Libya has seen the worst fighting since the NATO campaign to oust Moammar Gadhafi in 2011. General Khalifa Haftar who attempted to topple the central government two months ago, declared war on al-Qaeda inspired groups which are attempting to seize full control of the country. His forces have claimed responsibility for bombing raids in Tripoli on Saturday and Monday.

In the campaign to topple Gadhafi fighters from Zintan and Misrata, two large tribes, were comrades. But they were divided this year and have started clashing over Tripoli. Western countries are concerned that Libya will become a failed state as the weak government cannot control the armed factions.

In a challenge to the Parliament elected on June 25, a spokesman of the Dawn operation named for former General National Congress (GNC) to be reinstated, Misrata forces rejected the new House of Representatives, where the Liberals and legislators who advocate a federal system have made a strong impression.

In a sign of deep divisions between the regions of Libya and the political factions of the House of Representatives declared Operation Dawn and militants as Ansar al-Sharia as "terrorist groups." The House of Representatives, who fled to Tobruk, east with senior officials to escape the fighting, asked General Haftar to fight the forces of Operation Dawn. Haftar launched a campaign against the militants in the eastern city of Benghazi in May and threw his weight behind the Zintan fighters. His commander of air defense, al-Sager Jouroushi said that his forces were responsible for airstrikes on Saturday and a similar attack Monday. Misrata forces are blamed for the bombings on Egypt and the UAE, two countries that have raged against the militants.

The Libyan government says it does not know who is behind the attacks. "This is a war between the Libyan government and state institutions run by our sons, soldiers and officers of the army against the terrorist groups outside the law," the House of Representatives said in a statement. Fighting also broke out between troops who allied with the Islamists in two suburbs of Benghazi on Saturday and the Special Forces, loyal to Haftar. The clash left eight dead and 35 wounded. The violence has prompted the U.N. and foreign embassies in Libya to evacuate their staff and citizens, and foreign airlines have largely stopped flying to Libya.

The central government of Libya does not have a national army that works and relies on the militia for public safety. But while these forces receive state salaries and uniforms, they report in the practice of their own commanders and cities.
Last Update: Aug 25, 2014 11:31 am
RELATED TOPICS