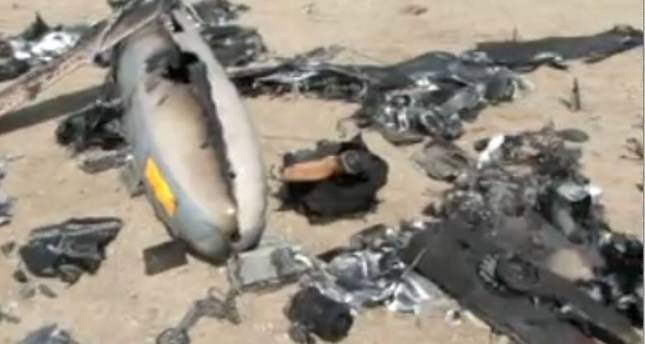 by Associated Press
Aug 25, 2014 12:00 am
Iran's state TV on Monday broadcast footage purported to show an Israeli drone the country's Revolutionary Guard claimed to have shot down over the weekend near an Iranian nuclear site.

The brief video, aired on the Arabic-language Al-Alam TV, shows what the channel says are parts of the drone, scattered in an unidentified desert area.

A scroll accompanying the footage says the drone was downed on Saturday and identifies it as a Hermes 450, a known Israeli model. The Iranian TV also says the model is dubbed "Spy Goddess."

However, there were no visible Israeli markings on the aircraft in the footage and Israel's military has declined comment on the matter. Calls by The Associated Press to Iranian officials for details on the drone were not immediately returned. The aircraft was not shown to foreign media.

The incident comes as Iran negotiates with world powers over its controversial nuclear program and Iranian hard-liners press moderate President Hassan Rouhani to demand more concessions before limiting the country's atomic capabilities. Israel has not ruled out taking military action against Iran's nuclear facilities if its capability to build an atomic weapon progresses.

The West suspects Iran's nuclear program is geared toward building a nuclear weapon. Iran denies the charge, saying its nuclear activities are for peaceful purposes only, such as power generation and medical research.

The Guard statement on Sunday said its forces fired a missile as the drone neared Iran's uranium enrichment facility in Natanz, some 240 kilometers (150 miles) south of the capital, Tehran, without providing more details.

On Monday, Gen. Amir Ali Hajizadeh, head of the Guard's airspace division, insisted that the drone was Israeli, though he said its last flight did not originate in Israel.

Hajizadeh said the drone's range was about 800 kilometers (500 miles) and that it had two front and side cameras capable of providing high-resolution panoramic imaging. Israel is about 1,000 kilometers (620 miles) away from Iran's westernmost boundary and Natanz is about 600 kilometers (370 miles) inland from the closest border point in Iran.

"The operational range of the drone indicates it did not start its flight in Israel but departed from a country in the region," he said, adding cryptically, "We have some clues."

While Israeli officials refused to comment on the Iranian claim, Israel is known to possess a vast collection of sophisticated surveillance aircraft, including the Hermes. However, the aircraft's maker, Elbit, says the Hermes has a range of only 300 kilometers (200 miles), which would put Iran outside of its range.

Israel considers the Iranian nuclear program a grave threat, believing the Iranians are trying to develop a nuclear weapon, and Israeli intelligence closely monitors the program.

The Tehran program has been the target of espionage and sabotage efforts in the past. In 2010, the so-called Stuxnet virus temporarily disrupted operation of thousands of centrifuges, key components in nuclear fuel production, at Natanz.

Iran says it and other computer virus attacks are part of a concerted effort by Israel, the U.S. and their allies to undermine its nuclear program through covert operations. Israel has never commented on the allegations but is widely believed to have been involved in the Stuxnet attack.

Since then, Iran has also said that it discovered tiny timed explosives planted on centrifuges but disabled them before they could go off.

On Monday, Asghar Zarean deputy head of Iran's atomic department, told the semi-official ISNA news agency that some of the malware discovered over the past month had targeted a nuclear facility that went online over the weekend.

He was likely referring to the plant in the central city of Isfahan inaugurated on Saturday. Under an interim nuclear deal with the world powers, the facility will convert a type of uranium into a material that cannot be used to make nuclear weapons.

"It's obvious to us that countries like Germany, France and Britain under leadership of the United States are involved in efforts to disturb our activities," said Zarean.