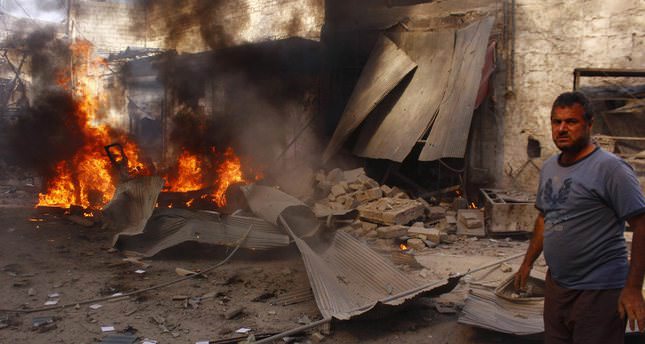 by AA Aug 26, 2014 12:00 am
At least 77 people were killed in air and ground operations across Syria on Tuesday by forces of President Bashar al-Assad, opposition activists say. The London-based Syrian Network for Human Rights, which tracks civilian and opposition casualties, said the regime's air and land operations Tuesday killed 25 in Aleppo, 17 in Daraa, 11 in the suburbs of capital Damascus, six in Homs, five each in Ar-Raqqah and Hama, four each in and Deir ez-Zor and Idlib.

The council said there are intense clashes in Aleppo between the self-proclaimed ISIS group and Syrian Islamic Front and ISIS fired rockets to the area.

The Syrian opposition destroyed seven military checkpoints in clashes with the regime forces in Al-Zabadani,a city in southwestern Syria in the Rif Dimashq Governorate, close to the border with Lebanon, SRGC added.

Militants affiliated with ISIS, fired rockets into Aleppo according to the Syria General Revolutionary Council.

The ISIS have unilaterally declared a "caliphate" -- rejected by Muslims leaders and scholars -- in the areas they control between Syria and Iraq, driving 1.2 million from their homes and targeting Shiite Muslims, Turkmen, Ezidis and Christians.