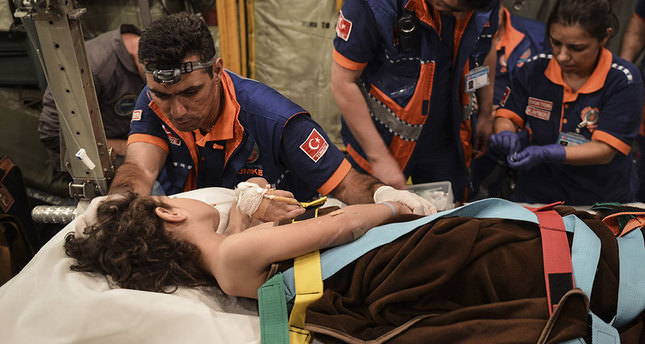 by AA Aug 26, 2014 12:00 am
At least 3000 children have sustained injuries in Israel's ongoing onslaught on the blockaded Gaza Strip, according to a Geneva-based watchdog.

In a statement issued Tuesday in Gaza, the EuroMed Observatory for Human Rights said its teams in the coastal Palestinian territory had registered cases of 3000 children hurt during the Israeli offensive.

It said at least one third of them suffered permanent disabilities.

The watchdog accused Israel of committing "flagrant violations" against Gaza's civilian population and demanded an end to "Israeli crimes against humanity."

Since July 7, Israel has pounded the blockaded Gaza Strip with the stated aim of halting rocket fire from the Palestinian territory.

At least 2133 Palestinians, mostly civilians, have been killed and nearly 11,000 others injured in relentless Israeli attacks, according to the Palestinian Health Ministry.

Thousands of homes across the beleaguered enclave, meanwhile, have been partially or completely destroyed.

Over the same period, 64 Israeli troops have been killed in combat operations in Gaza while four civilians were killed in rocket attacks on Israel, according to Israeli figures.

The Palestinian death toll from Israel's latest offensive has now surpassed the combined total fatalities from two earlier military assaults on Gaza, including Israel's bloody "Operation Cast Lead" in 2008/09 in which at least 1500 Palestinians were killed over the course of three weeks.