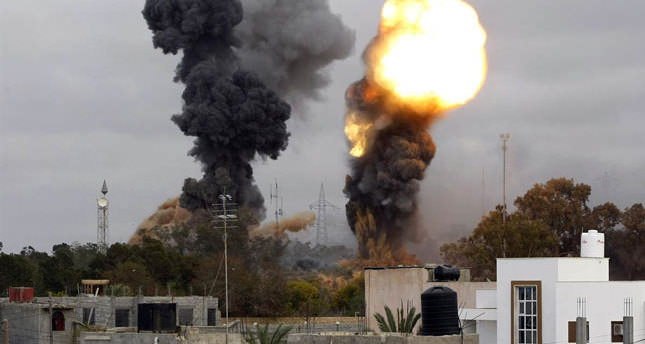 by Daily Sabah Aug 27, 2014 12:00 am
The New York Times reported yesterday that Egypt and the UAE teamed up for the airstrikes against al-Qaida inspired groups in Tripoli, Libya last week. The al-Qaida inspired groups captured the airport in Tripoli on Sunday following the unsuccessful and anonymous bombing against them. The Egyptian and Emirati forces, aiming to overcome the militant groups, were responsible for the airstrikes, said American officials.

Authorities of both states denied any direct action in Libya, adding they support the forces combatting the militants. The western diplomats in the region are worried that the intervention could further provoke the Libyan conflict.

Following the uprisings against Moammar Gadhafi three years ago, different groups stepped up to re-control the country. Egypt and the UAE backed tribal and regional militia in the power struggle of Libya, and consider the militant groups a domestic threat against their authority.

Forces in eastern Libya under a former general, Khalifa Haftar, claimed responsibility for the recent airstrikes. However, the long distance strikes at night were beyond the military capabilities of Haftar's forces. According to American officials, Egypt provided bases for the launch of the airstrikes, while the UAE provided the pilots, warplanes and aerial refueling planes. The UAE has the most effective air force in the Arab world, equipped and trained by the U.S.
Last Update: Aug 27, 2014 2:06 am
RELATED TOPICS