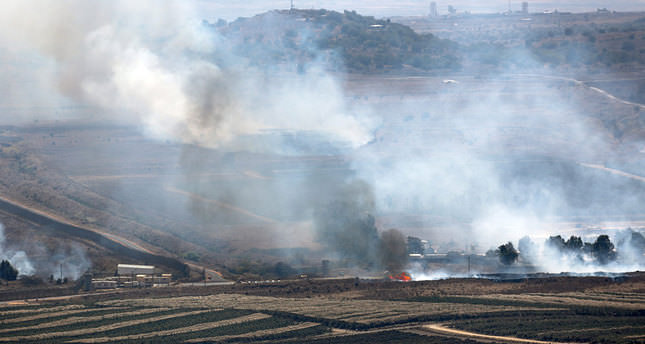 by Associated Press Aug 27, 2014 12:00 am
Syrian rebels, including fighters from an al-Qaida-linked group [al-Nusra Front], seized control of a frontier crossing with Israel in the Golan Heights on Wednesday after heavy clashes with President Bashar Assad's forces, activists and rebel said.

The capture of the post along Syria's de facto border in the Golan held more symbolic value than strategic, but rebels said it would provide relief to nearby villages that were under siege by government troops.

The Britain-based Syrian Observatory for Human Rights said an array of rebel fighters, including from the al-Qaida-linked Nusra Front and the Western-backed Free Syrian Army, took the crossing after heavy fighting that left at least 20 Syrian soldiers and an unknown number of rebels dead.
It said clashes also raged in the towns of Jaba, Tal Kroum and Rawadi in Quneitra province.

Israel's military said earlier that an army officer stationed in the Golan Heights was wounded by errant fire Wednesday from the Syrian side of the frontier. It did not immediately comment on the crossing takeover.

The army said the fire appeared to be spillover from heavy fighting inside Syria. From the Israeli side of the de facto border, large clouds of smoke could be seen, as gunfire and explosions sounded in the distance. Israeli soldiers observed the fighting.

Israel has avoided taking sides in the war, but has responded when the violence has spilled across the border. In its response, the military said it targeted two Syrian army positions and "hits were confirmed." It gave no further details.

Israel says it holds the Syrian government responsible for any violence that emanates from its territory.