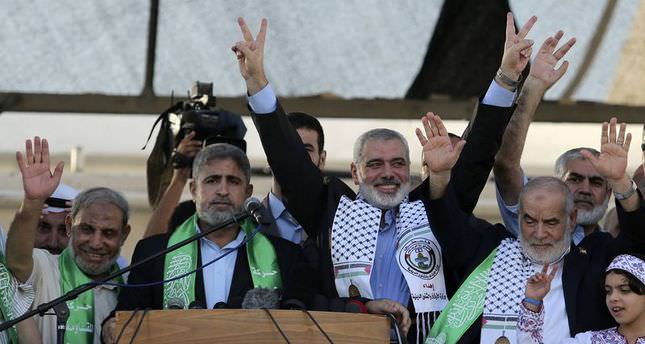 "[Hamas'] rule of the Gaza Strip did not distract the movement from embracing the resistance. On the contrary, it provided it with logistical and strategic assistance and kept it safe from Israeli agents," Haniyeh said in his first public appearance since the Israeli offensive began on July 7.

"Throughout the past eight years, the beleaguered, blockaded Gaza [Strip] which saw three [Israeli] wars has embraced the resistance," Haniyeh aid.

Hamas, the dominant group in the Gaza Strip, won the Palestinian legislative election in 2006. One year later, the group seized control of the strip after routing forces loyal to Palestinian Authority President Mahmoud Abbas.

"The development of the resistance? which was witnessed by the whole world is the result of long years of hard work and preparations," Haniyeh said.

"The resistance was not only preparing for a battle in Gaza, but for the full liberation of Palestine," he added.

An Egypt-brokered cease-fire went into effect on Tuesday, ending 51 days of relentless Israeli attacks on the Gaza Strip, which saw 2,145 Palestinians killed-the vast majority of them civilians-and nearly 11,000 injured.

The cease-fire deal calls for opening all border crossings between the Gaza Strip and Israel-effectively signaling the end of the latter's seven-year blockade on the coastal territory.

It also calls for expanding the zone in which Palestinian fishermen are allowed to ply their trade to six miles off the Gaza coast.

Under the agreement, Palestinian and Israeli negotiators will hold indirect negotiations on other core Palestinian demands-including the release of prisoners and the establishment of a Gaza seaport-one month later.

Over the course of Israel's offensive, launched with the stated aim of ending rocket fire from Gaza, at least 69 Israelis-64 soldiers and five civilians-were killed, according to Israeli figures.

Israel's "Operation Protective Edge" was the deadliest offensive against the Gaza Strip since Israeli forces withdrew from the enclave in 2005.

The number of Palestinian fatalities from the just-concluded offensive surpassed the combined death toll from two previous operations against Gaza, including Israel's 21-day "Operation Cast Lead" in 2008/09 in which at least 1500 Palestinians were killed.

The Gaza Strip-home to 1.8 million Palestinians-has reeled under a crippling Israeli blockade since 2006, which has all but destroyed the local economy and played havoc with inhabitants' livelihoods.