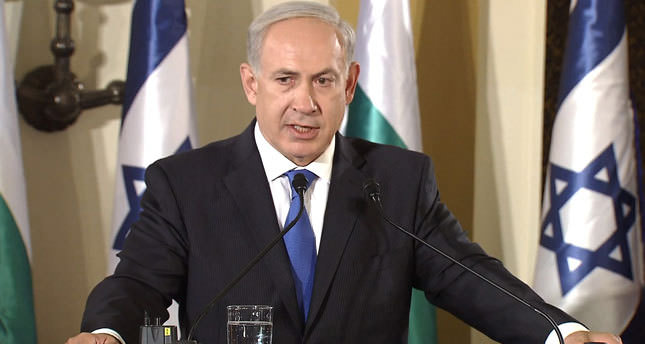 by Daily Sabah Aug 29, 2014 12:00 am
The permanent cease-fire that would bring an end to Israel's deadly attacks led to a growing dispute between the two sides over who is the winner of the weeks-long Gaza war. After the cease-fire stepped into effect on Tuesday night, Israeli authorities made the first official statement by asserting that Hamas could not achieve anything as its key demands were still rejected under the Egyptian-brokered cease-fire deal. Israeli Prime Minister Benjamin Netanyahu commented on the permanent cease-fire in a televised speech, saying that "Hamas was hit hard," and added that "the ceasefire was achieved without any of the terms being given." Hamas' demands, including reopening the seaport and airport and lifting restrictions on the movement of the people of Gaza, were not accepted by the Israeli delegation during the peace talks in Cairo, according to Netanyahu's statement. Netanyahu also talked about the major achievements the Israeli military made during its deadly assault on the Gaza Strip, stating that the complete destruction of the tunnels that Hamas militants built over the years was among the significant achievement of Israeli military as to fully demilitarize the Palestinian enclave.

According to a new poll published in Thursday's Haaretz newspaper, 54 percent of those surveyed said that there was no clear winner of the Gaza war. The poll questioned 464 Israelis on Wednesday over the current cease-fire between Israel and Hamas. The polls clearly show the attitude of Israelis towards the Gaza war, as the majority of them do not agree with Netanyahu's claims that it was Israel that achieved a "great military and political" victory over Hamas in the fighting in the Gaza Strip. After the open-ended truce entered into force, a Hamas official also described the recent cease-fire as a "victory for the [Hamas] resistance." The overall argument among Israelis is that Israel's deadly assault on the Gaza Strip, which led to a complete disaster in the besieged enclave, was seen as a "failure" due to the fact that none of Israeli airstrikes had succeeded in halting the militants' attacks or remove Hamas from power.

After the Israelis and Palestinians agreed to a permanent cease-fire, there has been no report of attacks from both sides, as it proves that a normalcy is set to return to the Gaza Strip so long as the truce prevails. The immediate halt in the fighting has led to an ease in the ongoing tensions on both sides of the border. Yet, whether the current cease-fire would prevail is a matter of concern, as the peace talks had continued on the volatile ground.

A humanitarian convoy of the United Nations World Food Programme (WFP) successfully crossed the Rafah border into the Gaza Strip immediately after the truce was confirmed. This was the first time the WFP entered into Gaza through the Rafah border. "It is extremely important that we have access to the Gaza Strip from different routes including the Rafah crossing to ensure a constant flow of humanitarian supplies to meet the growing needs of the people affected by the recent violence," said Mohamed Diab, the WFP Regional Director for the Middle East, North Africa, Central Asia and East Europe.
Last Update: Aug 29, 2014 10:05 am
RELATED TOPICS