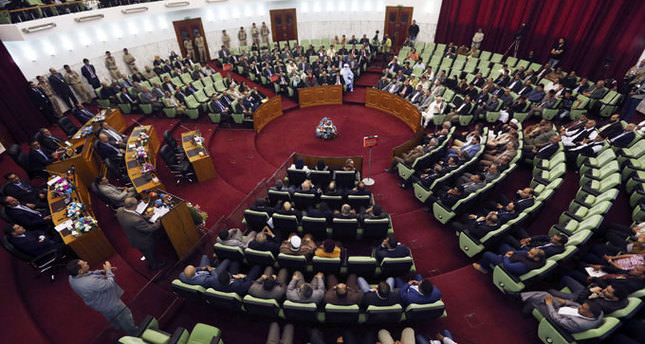 by Daily Sabah Aug 29, 2014 12:00 am
Amid the growing political instability that is threatening to tear Libya apart, Libyan Prime Minister Abdullah al-Thani and his interim cabinet announced its resignation to make way for a new House of Representatives to form a government based on all parts of society. The Libyan government, in a state of continued turmoil and at the mercy of militias, has not had enough power to bring an end to the political crisis.

"The government, in compliance with constitutional rules, offers its resignation to the Libyan parliament, being confident that the assembly will succeed in selecting a new government representing all categories of the Libyan people," the Libyan government said in a statement late Thursday, according to the Deutsche Presse-Agentur news agency.

Due to the increasing clashes between militia groups and Libya's army factions in recent weeks in the capital city, Tripoli, the U.N. Security Council, alarmed, called for an immediate cease-fire in the country. In addition, French President Francois Hollande called for U.N. support in order to bring the chaos to an end, adding that the turmoil in Libya would likely spread across the region, mainly to neighboring Egypt, Algeria and Tunisia.

Regarding a series of airstrikes that hit military camps recently in Tripoli, the Egyptian government denied any link. The U.S. held Egypt and the United Arab Emirates responsible for the joint airstrikes, which failed to stop militias from capturing the capital city, according to reports in The New York Times.

"Although Egypt is the most indirectly affected [country] by the deteriorating political and security situation in Libya, it is committed not to interfere in Libya's domestic affairs," Egyptian President Abdel-Fattah el-Sissi asserted in a presidential statement given on Thursday.

Libya has been suffering from a chronic absence of security as heavy clashes threaten to tear the country apart. Various actors have taken the stage including the fragile central government, the two main armed militias – Zintanis and Misratans – and the Libyan National Army, led by renegade General Khalifa Haftar. A coalition of militias operating under Operation Down seized control of the Tripoli international airport on Aug. 23. The airport, which has been in the control of Zintani brigades, is of crucial importance due to the fact that whoever controls the airport has greater control over the capital city. The security situation has severely deteriorated due to the ongoing deadly clashes between rival militias. In the power vacuum created by the ongoing political chaos, major armed militia groups have tried to seize control of vast Libyan territories, and none of the actors have been strong enough to put an end to the ongoing turmoil.