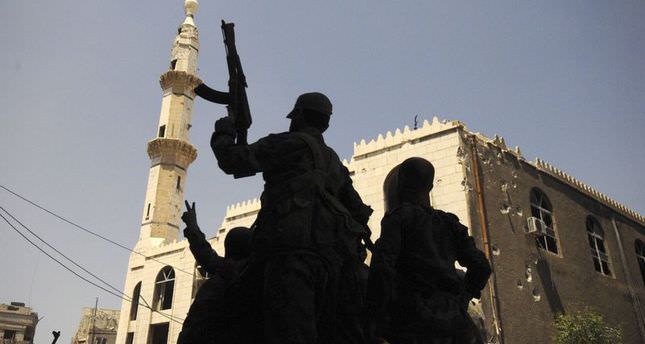 Assad's forces on Friday bombarded the Jubar eastern district of Damascus in a fierce offensive aimed at wresting control of the key sector back from rebels, multiple reports said.

Jubar has been in insurgent hands for a year, and is strategic because it provides a gateway to the centre of the capital.

It is also opens onto the Eastern Ghouta region, a rebel stronghold in Damascus province.

"A military operation has been under way since yesterday (Thursday)... to annihilate fighters pockets," a security source told AFP, using the regime term for rebels.

"A large number of fighters have been killed, and their hideouts and tunnels destroyed," the source added.

The official SANA news agency said the army had killed "dozens" of rebels "including a Jordanian and a Saudi", and had taken control of various buildings.

Residents of nearby areas reported Jubar under heavy bombardment since Thursday, with pillars of smoke rising above the area and warplanes overhead.

The Britain-based Syrian Observatory for Human Rights called the current government offensive against Jubar the heaviest since rebels seized it in summer last year.

At least 18 air raids on Thursday and 15 on Friday targeted the former middle-class district built in the 1960s, which most residents abandoned long ago.

"The regime wants to take this district, chase the rebels out of Damascus and advance on Eastern Ghouta," he said, adding that fighters from Syria's powerful Lebanese Shiite ally Hezbollah were supporting government forces.

In mid-August, the army took Mleiha some 10 kilometres (6 miles) southeast of Damascus. Seizing Jubar would allow a two-pronged advance on Eastern Ghouta.

In more than three years of fighting the number of deaths in the Syria conflict has topped 191,000, according to UN figures.

Despite heavy fighting between rebels and regime forces, this front has almost been relegated to the background as ISIS militants battle both insurgents and Bashar al-Assad's military.