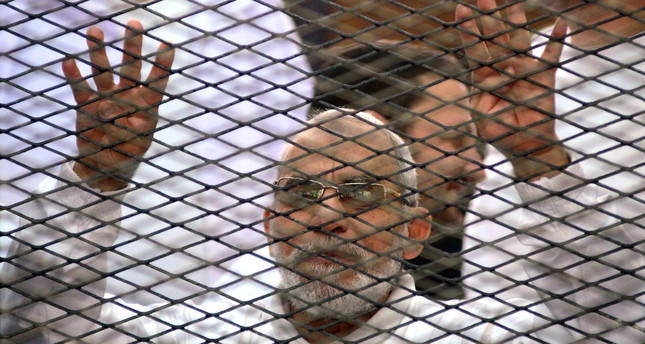 by Aug 30, 2014 12:00 am
An Egyptian court Saturday commuted a death sentence against the Muslim Brotherhood's spiritual leader to life in prison, in one of many trials of members of the group since their removal from power.

Mohamed Badie, the Brotherhood's Supreme Guide, still faces the gallows, however, after another court in southern Egypt passed a separate death sentence over deadly riots in August 2013, almost a month after the army toppled elected president Mohamed Morsi.

In Saturday's ruling, a Cairo court that had initially sentenced him to death for violent protests in the capital reduced the ruling to life in prison, on the recommendation of the mufti, the government's Islamic law expert.

The government that took over after Morsi's overthrow cracked down on Islamists, with at least 700 pro-Morsi protesters killed in clashes with police in a single day in August 2013.

Thousands have been imprisoned, including Morsi himself, and placed on trials that resulted in death sentences for more than 200 people.

The Cairo court on Saturday sentenced seven other Brotherhood leaders to life in prison, and six who were tried in absentia to death.

Those sentenced to death in absentia have the right to retrial if they surrender themselves.

With much of its leadership behind bars or in exile, the Muslim Brotherhood has persisted in organising small and sometimes violent protests across the country.

The government has designated the group, once the country's largest political movement, as a terrorist organisation, blaming it for militant attacks that have killed scores of policemen and soldiers.

The group deny involvement in the attacks, the deadliest of which have been claimed by an Al-Qaeda inspired group based in the Sinai Peninsula.
Last Update: Aug 31, 2014 2:32 pm
RELATED TOPICS