UN report on Syrian refugees does not reflect actual situation 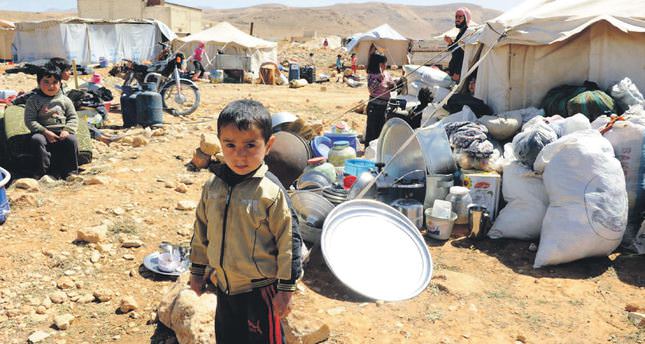 The U.N. reports 815,000 Syrian refugees residing in Turkey. However, the actual number of refugees in Turkey hits at least 1 million, according to officials, as more Syrian refugees are expected to arrive

According to the data released by the Disaster and Emergency Management Directorate (AFAD) on April 2014, there were already 900,000 Syrian refugees residing in Turkey, 220,000 of whom have reportedly been living inside camps. The rest, approximately 700,000 have been residing outside. Considering the worsening humanitarian situation and growing insecurity in Syria, these numbers have increased since April, as the Turkish government tries to cope with the continuing influx of Syrian refugees.

"The Syrian crisis has become the biggest humanitarian emergency of our era, yet the world is failing to meet the needs of refugees and the countries hosting them," said António Guterres, the U.N. High Commissioner for Refugees. Reiterating the need for more help from neighboring countries, "The response to the Syrian crisis has been generous, but the bitter truth is that it falls far short of what's needed," he said, while urging countries for additional aid and assistance.

As neighboring countries struggle to cope with the influx, European countries have been imposing more restrictive measures on Syrian refugees. In the face of millions of desperate and vulnerable Syrians fleeing the war, among 3,947 Syrian asylum applications, Britain allowed only 24 Syrians to reside in Britain under a special relocation programme for refugees. As Britain declined to participate in the U.N.-administered resettlement program for displaced people, British Prime Minister David Cameron offered a "relocation scheme" for vulnerable Syrian refugees in January 2014. The scheme covers five years of "humanitarian protection, including benefits and the possibility of family reunification." In June 2014, Germany and Austria agreed to increase the number of Syrian refugees accepted in their country under its humanitarian admission program. However, compared to neighboring countries, the U.N. refugee agency needs to encourage European countries more in order to share the burden of the international community over the Syrian refugee problem. "Syrians are now the world's largest refugee population under UNHCR care, second only in number to the decades-long Palestinian crisis. The Syrian operation is now the largest in UNHCR's 64-year history," the U.N. refugee agency said in a statement.

Turkey, which shares a 900-km border with Syria, still maintains its open door policy to those fleeing the Syrian civil war. In early January, the Turkish government opened its 22nd camp and UNHRC discusses with the Turkish authorities over additional support to help the Turkish government. So far, Turkey has made significant contributions towards solutions for improving the situation in refugee camps. According to AFAD'S report in 2013, Turkey established 22 camps at a cost of about $2 billion (TL 4.3 billion) for those who chose to stay in the camps while the rest found accommodation outside the refugee camp area.

Despite UNHRC call on the neighboring state to make more investments to the refugee camps through the help of international authorities, Turkey has already met its capacity to generously welcome new waves of Syrian refugees, posing significant problems for both the Turkish government and the refugees residing in and outside the camps.
Last Update: Aug 30, 2014 1:39 am
RELATED TOPICS