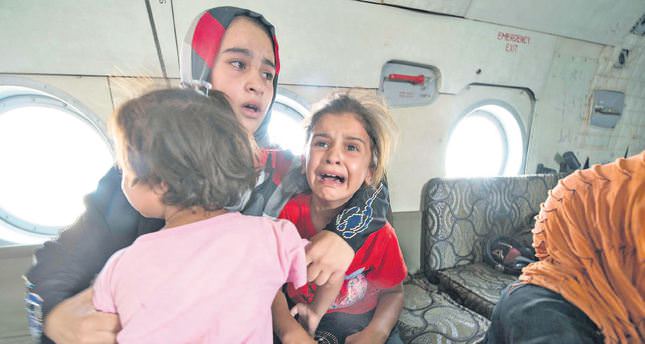 Amerli, which was surrounded by ISIS militants two months ago, was reached by Iraqi forces after the U.S. carried out airstrikes against the militants. Thousands of Shiite Turkmens were trapped in the town

A breakthrough in the siege of Amerli, a Turkmen town lying between Tikrit and Kirkuk, came after the U.S. carried out airstrikes against Islamic State of Iraq and al-Sham (ISIS) militants overnight. The U.S. planes also dropped humanitarian aid to the trapped people along with Germany, France, the U.K. and Australia, as thousands were in need of immediate aid. U.S. President Barack Obama authorized the operation to prevent an ISIS attack on residents of Amerli.

ISIS besieged the town two months ago, after capturing Tikrit and Mosul from Iraqi forces. According to Iraqi military officials, the Iraqi forces moved into the town and captured 15 ISIS militants. Yet, no death toll was confirmed. The operation to reach Amerli began on Saturday when an alliance of Iraq government forces, Shia militias and Kurdish peshmerga began a two-front attack on ISIS positions. Although people in Amerli started organizing celebrations, it was reported that the ISIS militants were still posing a threat to Iraqi forces, and the militants were not completely eradicated from the town. Security spokesman Lt. Gen Qassem Atta told the AFP news agency, "Our forces entered Amerli and broke the siege."

"Security forces and militia fighters are inside Amerli now after breaking the siege, and that will definitely relieve the suffering of residents," said Adel al-Bayati, mayor of Amerli. "I can see the tanks of the Iraqi army patrolling Amerli's street now. I am very happy we got rid of the ISIS terrorists who were threatening to slaughter us," said Amir Ismael, an Amerli resident, to Reuters news agency. The Turkmen, ethnically Turkish, are Iraq's third largest ethnic group after Arabs and Kurds. Most are Sunni Muslim. Turkmen, speaking Turkish, have been living in Iraq for centuries.

The fear of a massacre in the town has not ended as ISIS introduced itself to the world via atrocities and intolerance for its opponents. A month ago, ethno-religious minority Yazidis were massacred by ISIS militants in Iraq's Sincar, and thousands had to flee from their homes. A few weeks ago, ISIS militants executed more than 700 people in Syria who were members of an opponent tribe. Furthermore, last week ISIS militants killed more than 400 Syrian troops loyal to President Bashar Assad. ISIS, an al-Qaeda offshoot, has declared an Islamic caliphate in large swathes of territory it seized in recent months in Syria and Iraq.
Last Update: Sep 01, 2014 1:21 am
RELATED TOPICS