Negotiations for the release of UN peacekeepers continues 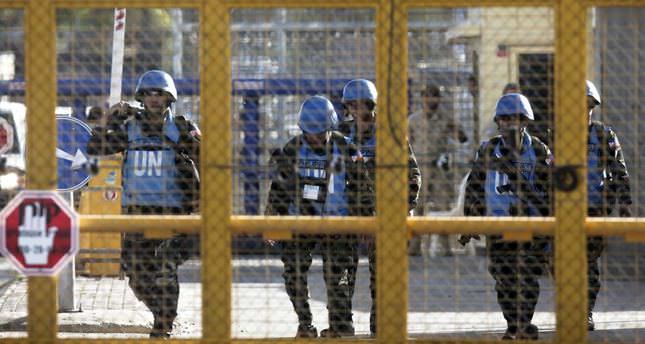 by Daily Sabah Sep 01, 2014 12:00 am
Amid increasing tension on the U.N.- monitored armistice line with Syria, negotiations for the release of 44 Fijian peacekeepers seized by an al-Qaeda-linked group on the Syrian side of the Golan Heights continued on Sunday, the head of the Fijian army said, according to Reuters. However, there has been no information as to where the abducted peacekeepers are being held by the militants. "We still at this stage cannot confirm the exact location of our troops. We are continuing negotiations at all levels," Fijian army commander Brigadier General Mosese Tikoitoga told a media conference in Fiji on Sunday. "However, we are still very concerned that we cannot confirm at this stage their exact location, whether they are still in Syria or whether they have been moved to neighboring countries," he added.

According to U.N. reports, more than 70 Filipino troops are still being detained by militants in a different area of the volatile frontier between Israel and Syria. Even though they are reportedly safe, the whereabouts of the detained peacekeepers is unknown. The Philippine military said that dozens of their U.N. peacekeepers escaped on Saturday night. After a seven-hour firefight with militants, the U.N. Disengagement Observer Force (UNDOF) "reposition[ed] troops to a more secure position within the mission area."

An area of 1,200 square kilometers of the Golan Heights was captured by Israel during the six-day war of 1967. Israel annexed the area in 1981, an internationally unrecognized territory. The UNDOF has been responsible for monitoring the cease-fire since 1974. So far, 1,223 peacekeepers have been in the zone from six countries, including Fiji, India, Ireland, Nepal, the Netherlands and the Philippines. Austria, Japan and Croatia have pulled all of their troops out of the conflict zone due to the deteriorating situation and spillover effect from the Syrian war.

Meanwhile, Israeli air defenses reportedly downed a drone from Syria over the occupied Golan Heights on Sunday. The Israeli army "successfully intercepted an unmanned aerial vehicle (UAV) that breached Israeli airspace above the border with Syria," the Israeli military said in a statement. This shows the spill-over effect of the heavy fighting between Syrian government troops and opposition forces in Syria to the buffer zone separating Syrian and Israeli-occupied territories.
Last Update: Sep 01, 2014 5:11 pm
RELATED TOPICS