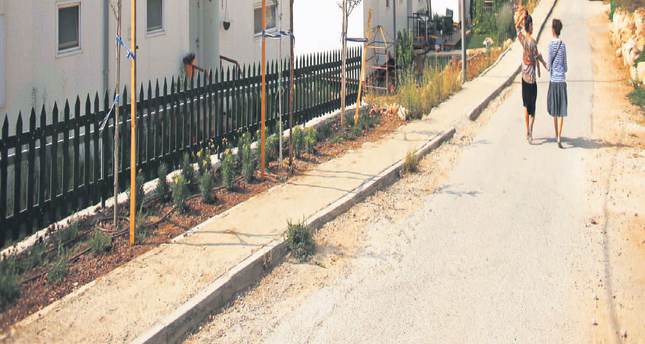 by Zeynep Doğusan Sep 02, 2014 12:00 am
The seven-week-long Israeli attacks on Gaza did not undermine the sympathy of most Americans for Israel. According to the latest Pew Research Center poll conducted in August with 1,501 adult American respondents living in all 50 U.S. states, a majority of participants sympathized with Israel, with results reflecting the political, religious and age divides currently crippling the country's political administration.

Due to a "forced-choice question" of the poll, assessing levels of sympathy for Israel and Palestinians independently, 51 percent of respondents sympathize with Israel more while just 14 percent sympathize more with Palestinians. Republicans and evangelical Protestants are most likely to be highly sympathetic toward Israel.

Among those under 30, 62 percent have a lot or some sympathy with Israel while the sympathy of those above 65 increases to 72 percent. About eight in ten, or 81 percent of evangelical Protestants say they sympathize with Israel. By contrast, many Democrats, particularly liberal Democrats as well as young people and the religiously unaffiliated express at least some sympathy for both sides in the Middle East. Although the number changes between different ideological groups, the total number of those who sympathize with Israel is the majority.

Israel's attack on Gaza ended last Tuesday with an agreement on several points including the easing the blockade. However, bad news from the occupied West Bank followed the joy from the truce in Gaza. Israel announced on Sunday the confiscation of 4 square kilometers of land to expand its settlements in the West Bank. Despite condemnation by the U.S and Palestinian officials, Israeli forces undertook new construction in Palestinian villages in the area. "We were surprised early this morning to find the Israeli civil administration and military handing out warning slips and putting up signs declaring the appropriation of more than 2,000 dunams [500 acres] for the expansion of three settlements that surround the village," said Ahmad Sukkar, head of the Wadi Fukin village council to Al-Jazeera. The current appropriation turns the privately owned Palestinian land that was used for agriculture for generations into Israeli state-land. "In 1948, we had 12,000 dunams [12 square kilometers] of agricultural land. Today that number has dwindled to 2,600 [dunams]. We are only allowed to farm on 250 dunams of those.

That's why we will go to the [Israeli] courts.We will not stand idly by as Israel carves up and snatches our land," Sukkar said.The newly appropriated area, which has a strategic importance for Israel, is the largest seized area since 1980 according to the anti-settlement group Peace Now. "The land is very close to the border and [...] is a very strategic area," said Yariv Oppenheimer, general director of Peace Now to Al-Jazeera. "For Israelis it will connect some of the settlements to south Jerusalem, and for Palestinians it's land that can allow them to expand villages around Bethlehem also south to Jerusalem." Al-Jazeera's comparison of land seizure to other parts of the world, gives a general idea to those unfamiliar with the region.

Israel's settlement activities are regarded as illegal under international law by most countries and the latest announcement was met with condemnation by Western powers. After the U.S, which regarded the decision as counterproductive to peace efforts and the two-state solution, the U.K. deplored the Israeli government's land expropriation. "Our position on settlements is clear - they are illegal under international law," said Philip Hammond the U.K. Foreign Secretary on Monday in a statement in London. "This is a particularly ill-judged decision that comes at a time when the priority must be to build on the cease-fire in Gaza. It will do serious damage to Israel's standing in the international community."

Concerns on Israel's international place were also expressed domestically. Israeli Finance Minister Yair Lapid claimed that the decision had never been put before the cabinet and he had been unaware to it. "It is an underhanded opportunistic move that harms Israel," he said to Israeli daily Yedioth Ahronoth.