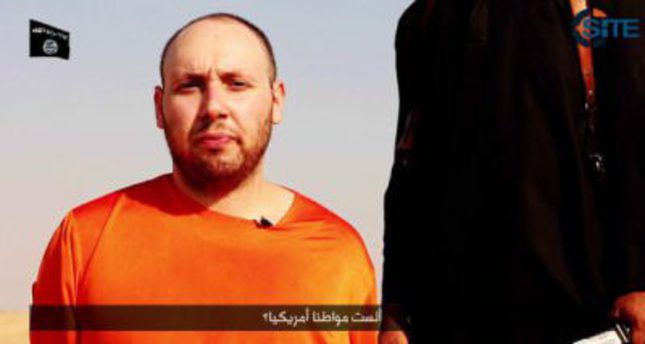 After beheading the American photojournalist James Foley two weeks ago, ISIS militants executed another American in response to U.S. airstrikes which have largely prevented ISIS's gains

A video was released on Tuesday by the Islamic State of Iraq and al-Sham (ISIS) showing the execution of an American journalist, Steve Sotloff who was also holding Israeli citizenship. The video was first obtained and released by the SITE Intelligence Group, which tracks the online activities of terrorist groups, and was determined to be authentic by the U.S. intelligence community according to a statement from National Security Council spokesperson Caitlin Hayden.

The video was similar to the video released last month of an ISIS militant killing American journalist James Foley who was held captive for more than 600 days after being abducted by ISIS in Syria. The fourminute video opens with a clip of U.S. President Barack Obama authorizing air strikes in Iraq that target ISIS militants. After this introduction, a title screen appears with the words "Message to America," followed by an American citizen, identified as James Foley, saying that American leaders are his "real killers." After delivering his speech, Foley is apparently executed by a man dressed in black with a knife. The ISIS militant is likely to be a native English speaker who speaks with a British accent.

In the latest video, the masked militant, addressing U.S. President Barack Obama, says to the camera that "You, Obama, have but to gain from your actions but another American citizen. So, just as your missiles continue to strike our people our knife will continue to strike the necks of your people.
We take this opportunity to warn those governments that enter this evil alliance of America against the Islamic State to back off and leave our people alone."

Sotloff, a freelance journalist had been held by ISIS since he was taken captive in Syria more than a year ago. President Barack Obama condemned the killing Wednesday during a press conference in Estonia, saying the nation's thoughts are with Sotloff 's family. "Whatever these murderers think they'll achieve by killing innocent Americans like Steven, they have already failed," Obama said, pledging that the U.S. will not rest until Sotloff 's killers are brought to justice. "We will not be intimidated, we will not forget,"

Obama added, "and our reach is long, and justice will be served."The U.S. continues targeting ISIS militants in Iraq despite the threats and executions.

The Pentagon began considering military options to expand the strikes against ISIS after the militants last week posted a gruesome video showing the beheading of American photo-journalist James Foley.

According to Reuter's, deliberations by Obama's national security team on expanding the campaign against ISIS from Iraq into neighboring Syria gathered pace in recent days. It still remains unclear when or whether they will start. But the Obama administration appears disturbed by the group as one of its citizens was beheaded and others are still captive. Last year Obama approved attacks against Bashar Assad's forces, although no strike was carried out.