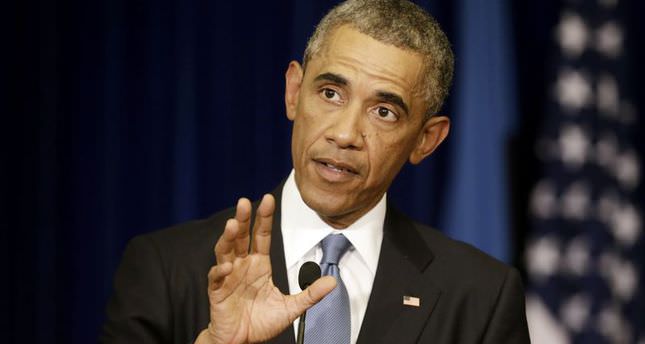 by Associated Press Sep 03, 2014 12:00 am
President Barack Obama said Wednesday that the United States will not be intimidated by ISIS militants after the beheading of a second American journalist and will build a coalition to "degrade and destroy" the group.

Obama still did not give a timeline for deciding on a strategy to go after the extremist group's operations in Syria. "It's going to take time for us to be able to roll them back," the president said at a news conference during a visit to Europe.

The president's comments came after he said the United States had verified the authenticity of a video released Tuesday showing the beheading of freelance reporter Steven Sotloff, two weeks after journalist James Foley was similarly killed.

Obama vowed the U.S. would not forget the "terrible crime against these two fine young men."

"We will not be intimidated. Their horrific acts only unite us as a country and stiffen our resolve to take the fight against these terrorists," Obama said. "And those who make the mistake of harming Americans will learn that we will not forget, and that our reach is long and that justice will be served."

During an appearance in Maine, Vice President Joe Biden said the U.S. would follow the militants to "the gates of hell."

"As a nation, we're united. And when people harm Americans, we don't retreat, we don't' forget," Biden said. "We take care of those who're grieving and when that's finished they should know we will follow them to the gates of hell until they are brought to justice. Because hell is where they'll reside."

Secretary of State John Kerry said in a statement that "barbarity, sadly, isn't new to our world. Neither is evil."

Obama also sought to clean up the damage from his statement last week that "we don't have a strategy yet" for dealing with the ISIS group in Syria. Republicans quickly seized on the remark to argue the president lacks a coherent approach to fighting the extremist group.

"It is very important from my perspective that when we send our pilots in to do a job, that we know that this is a mission that's going to work, that we're very clear on what our objectives are, what our targets are," Obama said. "We've made the case to Congress and we've made the case to the American people, and we've got allies behind us so that it's not just a one-off, but it's something that over time is going to be effective."

In the Sotloff video, a masked militant warns Obama that as long as U.S. airstrikes against the Islamic State group continue, "our knife will continue to strike the necks of your people."

Obama responded that the airstrikes have been effective in blunting the militant threat and he will continue to battle the "barbaric and ultimately empty vision" that the ISIS represents. He said he will consult with NATO allies at a summit in Wales Thursday and Friday on a strategy to combat the Islamic State and other militant networks that arise.

"Our objective is clear, and that is to degrade and destroy ISIS so that it's no longer a threat not just to Iraq, but also the region and to the United States," he said, using an acronym for the militant group.

Estonian President Toomas Hendrik Ilves, appearing alongside Obama, expressed solidarity in the fight. "We see ISIS as a serious threat to all of us, and stand together with the United States and our allies on this issue," Ilves said, using an alternative name for the group.

Sotloff, a 31-year-old Miami-area native who freelanced for Time and Foreign Policy magazines, vanished a year ago in Syria and was not seen again until he appeared in the video that showed Foley's beheading. Dressed in an orange jumpsuit against an arid Syrian landscape, Sotloff was threatened in that video with death unless the U.S. stopped airstrikes on the ISIS.

In the video distributed Tuesday and titled "A Second Message to America," Sotloff appears in a similar jumpsuit before he is apparently beheaded by a fighter with the ISIS, the extremist group that has conquered wide swaths of territory across Syria and Iraq and declared itself a caliphate.

British Foreign Secretary Philip Hammond told the BBC Wednesday that the masked, British-accented jihadist appears to be the same person shown in the Foley footage. In the video, the organization threatens to kill another hostage, this one identified as a British citizen.

Last week, Sotloff's mother, Shirley Sotloff, pleaded with his captors for mercy, saying in a video that her son was "an innocent journalist" and "an honorable man" who "has always tried to help the weak."

Obama said the prayers of the American people are with the family of the "devoted and courageous journalist" who deeply loved the Islamic world and whose "life stood in stark contrast to those who have murdered him so brutally."

"His killers try to claim that they defend the oppressed, but it was Steven who traveled across the Middle East, risking his life to tell the story of Muslim men and women demanding justice and dignity," Obama said. "Whatever these murderers think they'll achieve by killing innocent Americans like Steven, they have already failed. They have failed because, like people around the world, Americans are repulsed by their barbarism."

State Department spokeswoman Jen Psaki said Tuesday that it is believed that "a few" Americans are still being held by the ISIS. Psaki would not give any specifics, but one is a 26-year-old woman who was kidnapped while doing humanitarian aid work in Syria, according to a family representative who asked that the hostage not be identified out of fear for her safety.