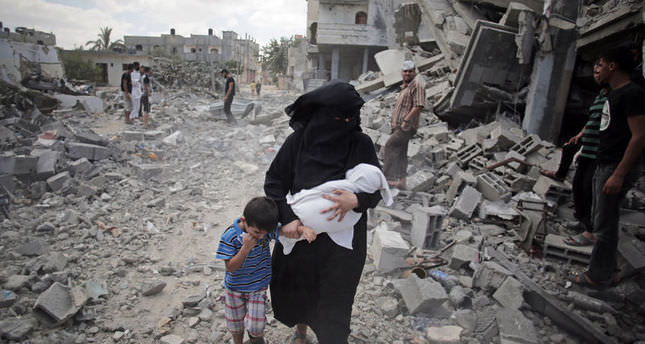 by Daily Sabah Sep 04, 2014 12:00 am
Palestine Undersecretary of Public Works Naci Serhan claims that they need $30 million (TL 64 million) to clear 3 million tons of rubble in the Gaza Strip. "We are facing the problem of blockade and the lack of needed material to clean the area and reconstruct the region" Serhan said to AA. "Even with the provision of the necessary equipment we need about a year to clean this amount of rubble." The Ministry of Public Works and Housing is seeking an efficient solution for the problem. Suggestions on reusing the rubble in the construction of Gaza harbor or of a breakwater are being negotiated.

According to ministry data, 17,200 buildings have totally collapsed and 41,300 have been partly damaged in Gaza. Hundreds of Palestinian families became homeless following the collapse of Gaza's neighborhoods. Turkish NGO, Humanitarian Relief Foundation (IHH) is planning to launch several humanitarian projects for Palestinians affected by the Israeli attacks.

Mehmet Kaya, an IHH representative in Gaza, said AA his agency planned to rebuild the homes of Palestinians orphans, a mosque and school destroyed during Israel's offensive. He added, however, that an Israeli ban on construction materials entering the Gaza Strip since 2007, would have an adverse impact on planned projects.

Israeli onslaught to Gaza between July 7 and Aug. 26 ended with a truce agreement in Cairo. The death toll of the attacks increased to 2,149 Wednesday, with the death of Nasir Ebu Merahil, in the hospital he had been treated in.

Following the truce agreement in Gaza, Israel declared 400 hectares of land in West bank as "state land" for its new settlements. The decision has drawn international condemnation since Sunday.The Palestinians now intend to seek a U.N. Security Council resolution setting a three-year deadline for ending the Israeli occupation of Palestinian territories.

Palestinian negotiators Saeb Erekat and Majid Faraj met U.S. Secretary of State John Kerry Wednesday to talk about a timetable. "It was a constructive conversation that covered a range of issues, including Gaza, Israeli-Palestinian relations, and recent developments in the region," she said, adding they had agreed to talk again in the coming weeks," said State Department spokeswoman Jen Psaki.

According to Israel General Radio Report, Israel is worried the U.S. could abstain from voting on a possible U.N.Security Council resolution proposed by the Palestinian Authority (PA). Quoting anonymous Israeli sources, the report said Israeli negotiators were "not sure" whether the U.S. would use its veto power at the Security Council to nullify a possible draft resolution for an Israeli withdrawal from occupied Palestinian territories.

PA had warned that they would seek a U.N. Security council resolution, if the U.S.-mediated peace talks with the Israelis failed to produce a timetable. Kerry had spoken Wednesday by phone with Israeli Prime Minister Benjamin Netanyahu and protested new Israeli plans to confiscate some 400 hectares of land in the occupied West Bank for settlement building.