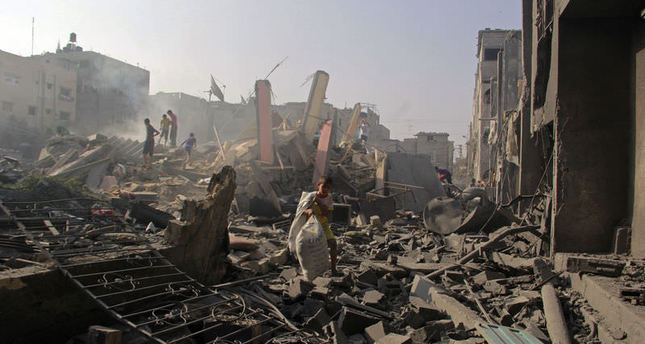 by AA Sep 04, 2014 12:00 am
Economic losses from Israel's recently-ended onslaught on the Gaza Strip has raised the unemployment level in the blockaded coastal territory to 55 percent, Gaza's workers union said Thursday.

Israel's devastating offensive, which lasted 51 days until it ended last week with a cease-fire deal, caused 30,000 Gazans to lose their jobs at over 500 shops, factories and company offices that were destroyed by relentless Israeli bombardments, according to a statement issued by the workers union.

The workers union said Israel's onslaught had exacerbated Gaza's unemployment problem, which was initially caused by a seven-year-long Israeli blockade of the territory that has left 170,000 Gazans jobless.

Israel's recent offensive against the Gaza Strip, which began on July 7, left some 2,147 Gazans dead and 11,000 injured-the vast majority of them civilians-while partially or completely destroying thousands of residential structures across the territory.

The offensive, launched with the stated aim of ending rocket fire from Gaza, finally ended with the announcement on August 26 of an open-ended cease-fire between Israel and Palestinian resistance factions.

According to Israeli figures, 67 Israeli soldiers and five civilians were killed over the course of the operation-the highest military death toll suffered by Israel since it lost 119 troops in its 2006 war on Lebanon.