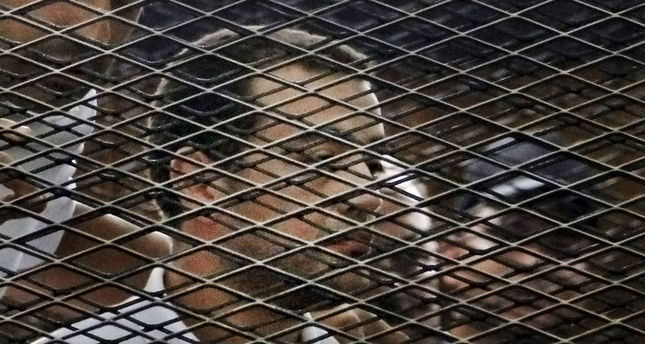 by Daily Sabah Sep 05, 2014 12:00 am
After the toppling of the first democratically elected president of Egypt, Mohammed Morsi, Egypt's military-backed authorities have waged a relentless crackdown on members of the Muslim Brotherhood and Morsi supporters. The judiciary of incumbent government of the former army chief Abdel-Fattah el-Sissi, since he came to power, has tried to avoid political dissidents through handing down death sentences to Morsi backers.
Since Morsi's ouster by the military, the Muslim Brotherhood was declared a terrorist organization that led the country into a state of chaos.

After members of the brotherhood declared possible targets, many brotherhood members have been arrested on charges of incitementto- violence and joining a terrorist group. Under Sissi's rule, military trials for civilians have come to the fore again as he announced all protests illegal. This may show that he has little inclination to compromise, as the country has long been suffering from political instability and lack of security.
As Morsi himself faced "four separate criminal charges, including espionage, jailbreak and offending the judiciary," Muslim Brotherhood leaders have faced charges of blocking roads, inciting violence and attacking security forces.

According to a report released by the Egyptian Observatory of Rights and Freedoms, only in August, 20 Morsi supporters were sentenced to death by Egyptian courts. Since the Sissi government came to power in the presidential election in May, a total of 2,595 years of imprisonment were given to 161 Muslim Brotherhood members on multiple charges, the Egyptian rights watchdog said.

The charges were "possessing of illegal arms, resisting authorities and joining [the Muslim Brotherhood group]." Three of those convicted were reportedly women who were given 25-year sentence each. In addition, the total fines imposed reached $120,000 (TL 260,172), the report said, according to Anadolu Agency (AA).

Sissi was elected Egypt's president with 96.9 percent of the vote, beating the only other candidate Hamdeen Sabahi. Many believed that Sissi signals a return to the authoritarian security state and is a new incarnation of Mubarak.

Meanwhile, Egyptian authorities ordered the suspension of the Cairobased NGO, Yaqazt Feker, due to "unspecified national security concerns," according to AA.Yaqazt Feker, established in 2009, groups 50 volunteers including several high-profile academics and experts.

Seif Abdel-Fattah, a political science professor who once served as an advisor to Morsi has been among the volunteer group. The Cairobased NGO aims to "spread development ideas and build human potentials with a view to helping reach a culturally mature society."