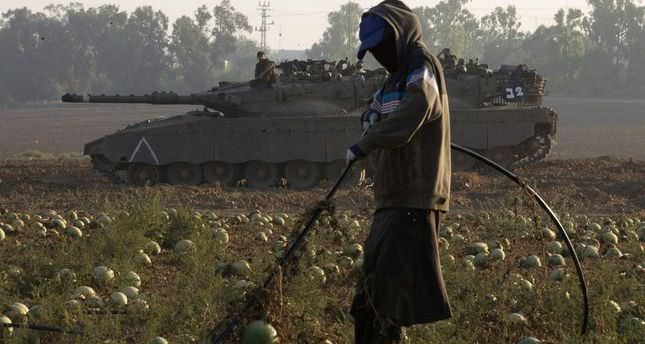 by AA Sep 06, 2014 12:00 am
The agriculture sector of the Gaza Strip had sustained a staggering $550 million of losses as a result of the just-ended Israeli war, a Palestinian Agriculture Ministry official said.

"This figure includes $350 million of direct losses and $200 million of indirect ones," Nabil Abu Shamala, the head of policies and planning at the ministry, added on Saturday.

He said Israel had heavily targeted Gaza's agriculture sector during its 51-day offensive, which ushered in acute shortages of locally-produced crops.

Abu Shamala said a sharp rise in the prices of agricultural products threatens food security in the Gaza Strip as a whole.

Apart from causing damage to the agriculture sector, Israel's offensive on the Gaza Strip had left 2,147 Palestinians dead and more than 11,000 injured.

An open-ended cease-fire between Palestinian resistance factions and Israel went into effect on August 26.

The deal-the result of indirect talks in Cairo-calls for opening all border crossings between the Gaza Strip and Israel, which, if carried out, would effectively end the latter's seven-year blockade of the coastal territory.