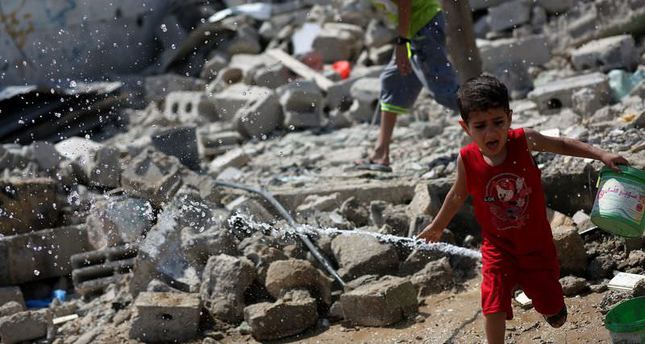 by Daily Sabah Sep 07, 2014 12:00 am
The seven-week long Israeli attacks on Gaza killed 2,200 Gazans including women, children and the elderly while wounding 11,000 people. Israeli strikes caused the total destruction of at least 17,000 homes while 5,000 units still need to be repaired from damage from previous battles. The trapped city already has a housing deficit of 75,000 units. Some Palestinian officials have estimated the massive restructuring could cost more than $6 billion (TL 13 billion). The housing assessment was based on the current level of goods allowed to be transferred from Israel to Gaza, which has a population of about 1.8 million.

The war did not only kill people or demolish homes but it also affected thousands of children who survived at the end of the attacks. Around half a million Gazans have been displaced as a result of the war, while thousands of houses, mosques, hospitals and cemeteries have been either partially or fully destroyed. According to statistics from the United Nations, there are now 1,500 new orphans in the Gaza Strip as a result of "Operation Protective Edge." U.N. statistics showed that at least 373,000 children suffered psychological strain after the latest Israeli attack on Gaza.

In the past six years there have been three major attacks on the Strip. There is only one leading orphanage in Gaza, which takes care of around 120 orphans. Al-Amal Orphanage said that it is preparing to receive more orphans. In order to be able to receive more orphans, Al-Amal urgently needs to finish one of its new buildings.