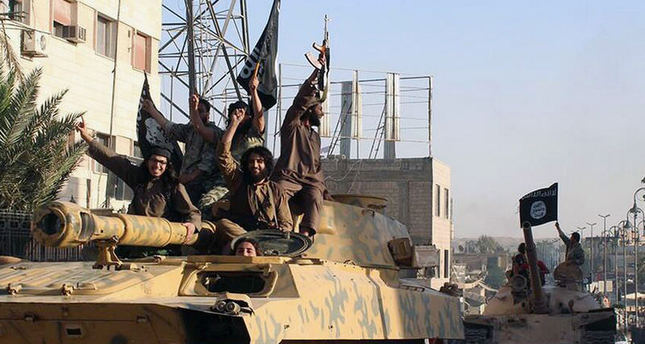 The issue of foreign fighters' participation with extremist groups in the Middle East was brought to the agenda after the terrorist organization Islamic State of Iraq and al-Sham (ISIS) gained control of Mosul, Iraq's second largest city in June.

Anadolu Agency (AA) reporters conducted an extensive study on official reports and statements, research from think tanks and experts' opinions regarding the European citizens who have gone to fight in Syria and Iraq.

According to the reports, out of the European fighters, most have come from France, Britain, and Germany with 900 French citizens, 500 Britons and 400 Germans having participated in Syria in the fight against the al-Assad regime that has massacred thousands of people. In Iraq, European fighters have fought alongside the ISIS-led militants who have been responsible for killing thousands of people.

The report of the American Soufan Group, which provides strategic security intelligence services to governments and multinational organizations, says that more than 2,500 fighters from western countries participated in the conflict with ISIS.
According to the report, most of the volunteers are between ages 18-19, and go straight to the front lines without having any military training.
The reports reveal that fighters who went to Syria and Iraq from non-Muslim countries have converted to Islam after participation with extremist groups.

The foreign fighters are taking part in these wars with the justification of fulfilling their duty in protecting their religion by helping the organization they empathize with and in protecting the people with whom they share the same religion.

The European police force, Europol, stated in a 2014 report that as long as the Syrian civil war continues, citizens from European Union member states will continue to fight there.

According to the report, the danger European countries face will increase in time as the fighters return to their countries.

According to the official reports from Germany – home to approximately five million Muslims – one out of four who fought in Syria and Iraq have returned, and more than half of those who came back are under 25.

Among those who went from Germany, 20 are said to have served in the army previously and have significant military expertise, constituting an important asset for the ISIS.

The German intelligence is monitoring those who returned from the war, and are trying to stop others who want to join the extremist groups on the front lines.

According to the reports, of the approximately 900 French citizens who participated in the war in Iraq and Syria, 332 people went to Syria and only 100 returned. Almost two out of three foreign fighters are French, and 20 percent of the French fighters later converted to Islam.

The French government is taking concrete steps against those who fought in these wars by strengthening existing laws against terrorism.
According to official statements, around 500 British citizens went to war in the Middle East, but some experts dispute the number to be as much as 700.

The Belgian Interior Ministry says that 150 Belgians participated with extremist groups in Syria and Iraq, and the Dutch intelligence service says that around 130 Dutch citizens participated in the conflicts, 30 of whom have returned to the Netherlands.

Christians, Jews and Muslims are among the 130 Austrians citizens who went to Syria and Iraq to fight, and 20 were killed, according to official statements.

In addition, there are around 100 people who went to fight in the Middle East from Denmark, 11 of whom were killed.

Around 50 came from Norway, with around 20 returning back to their country.

The issue of those who participated in terrorist groups in Syria and Iraq has become a priority issue in Bosnia and Herzegovina, Kosovo, Albania, Serbia and Macedonia.

Kosovo's authorities arrested 42 suspected militants last month who participated with ISIS and the militant al-Nusra Front in Syria and Iraq.

Kosovo's police report that 16 Kosovo Albanians have been killed fighting in Syria and Iraq.

Separately, Bosnia and Herzegovina arrested 16 people for participating in "terrorist activities" and being members of extremist groups.

At least 30 European Christians have gone to Iraq and Syria to fight against ISIS according to a report by an international institution.

According to Agenfor Italia, an Italy-based NGO whose project work supports the European Convention on Human Rights, says the number of European Christian fighters who have volunteered to fight against extremist groups in the Middle East increases day-by-day.

The report also showed that Judi Mikhael – a former Dutch policeman – volunteered in the Syriac militia, and died in 2001 in Iraq.

"Judi was in Iraq to train the local Christian fighting commands, and had voluntarily departed from the Netherlands together with other friends from Switzerland, Germany and Sweden. He was a 'martyr' according to the Syriac organization in Europe."

A former sergeant in the Swiss Army, Johan Cosar, is now a military trainer for the "Sutoro" – Assyrian Christian volunteers forces in Syria – according to both the report and Swiss media.

Cosar, the 31-year-old Christian volunteer from Locarno in Switzerland, stated that he is serving under the armed Syrian Kurdish People's Defense Units (YPG) who have been active since 2011. He said that he was "ready to die for his country," and continues to protect the Christian community in the conflict region.

A donation of at least 165,000 euros has been collected from Switzerland within the last two years, the Swiss media also claimed. The Austrian-based newspaper Krone alleged that more than 1,000 Christians still fight against ISIS in Iraq and Syria.

The Director of Agenfor Italia and Middle East expert, Sergio Bianchi believes that it is not an easy decision for European citizens to go to the Middle East and join extremist groups.

"These people believe that their communities are under threat, and this is the major driving force for fighting against IS[IS]," Bianchi said.