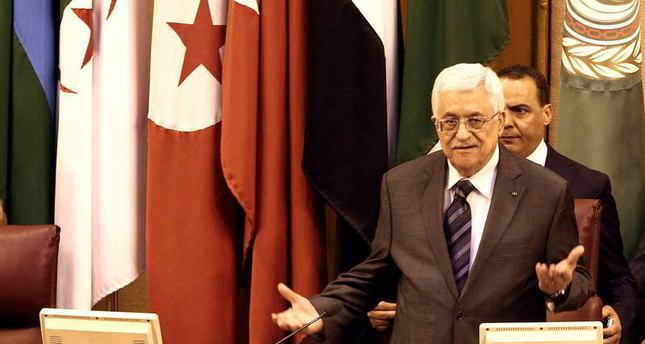 by Daily Sabah Sep 08, 2014 12:00 am
Palestinian President Mahmoud Abbas threatened to end the national unity government in Palestine if Hamas does not give up its authority in Gaza and let the new government operate there. Abbas criticized Hamas last weekend in Cairo where he attended the Arab League Foreign Ministers' meeting. On Saturday he told Egyptian reporters that he will not accept a partnership with Hamas if its "shadow government" continues to operate in
Gaza. "The national consensus government cannot do anything on the ground," Abbas said.

The following session of the Arab League was held behind closed-doors after Abbas attacked Hamas in the opening of his address. Abbas described Hamas's takeover of the Gaza Strip as a "coup," saying that the Palestinian Authority had tried to reconcile with them on more than one occasion. Shortly afterward the chairman of the session asked the media and international observers attending the meeting to leave.

Hamas answered Abbas with a call to stop addressing it through the media and start opening a door for dialogue. Hamas spokesman Sami Abu Zuhri said, "Abbas' statements are untrue, baseless and unfair to our people." Hamas leader Khaled Meshaal addressed Arab leaders in a meeting in a city in southern Lebanon organized by Palestinian resistance groups to celebrate the cease-fire with Israel. "Some of the Arab countries had left us alone in our hardest times but we have forgiven them," he said through a teleconference from Doha, where he is in exile. Hamas and Fatah formed a national unity government in June under the terms of the reconciliation agreement signed in April.

The government ended seven years of rival administrations in the West Bank and Gaza Strip, however, Hamas is the de facto power in Gaza.