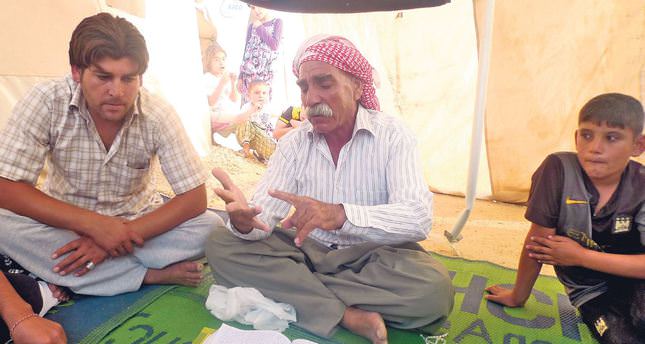 Daily Sabah paid a visit to a refugee camp in the southeastern city of Mardin, designated by the Turkish government for Yazidi refugees who fled from the atrocities of the Islamic State of Iraq and al-Sham (ISIS).

Short interviews were conducted with the residents and found that many members of the ethno-religious community are well educated and speak English. Many of them have relatives in Turkey and European countries who left their homeland during previous massacres committed by several regional actors including ousted President of Iraq Saddam Hussein.

When the Daily Sabah team entered the camp after gaining permission from the Republic of Turkey Disaster and Emergency Management Presidency (AFAD), they witnessed that the camp was quite orderly and main services were supplied regularly, including food deliveries, electricity and clean toilets.Camp officials said they give each resident a TL 85 ($39) card to purchase food from a market inside the camp.

Camp officials also provide kitchen equipment so that residents can cook their own meals since the residents of other camps were not pleased with the Turkish food provided. Residents also receive blankets and clothes when they need and there is a doctor and an ambulance in the camp. The camp manager said a school will be established for children, and teachers will be selected from the Yazidi community.

After talking to camp officials and obtaining information about the camp, the Daily Sabah team started talking to residents. When people saw the camera, they surrounded the team and said, "We want to raise our voices with your help." Eighteen-year-old Junaid, speaking English quite fluently, said, "We were trapped by the ISIS militants and they entered my house. I was face to face with one of them and he was about to kill me when he found a photo in the room. There were foreigners and unveiled women in the photo. He accused me of working for the U.S. I said I was just a student in a high school. Then he wanted me to give my laptop, cellphone and wallet. After taking my valuable items, he left." Junaid and his family including three sisters and four brothers started walking to Sinjar Mountain.

They spent a few days on the mountain with very limited food and water and then started walking again and reached the Turkish border. When asked about the Kurdish peshmerga forces that were responsible for guarding the city, Junaid smiled and said, "The peshmerga are nothing. They only consider their comfort. They have not fired even a bullet at the militants. In the beginning of the summer, Iraqi forces left, and one month ago, just before ISIS reached the city, Kurdish forces left."

While talking to Junaid, an old man ran up to the team and said, "You cannot imagine what I witnessed in the last days of my life. They killed children with knives - I saw the people's guts falling out of their bodies." He suddenly started crying and someone took him away. While walking in the streets the team saw another old man with a long moustache. After shaking hands he said, "Only Europeans enjoy the good sides of this world. Since I was born, there has been conflict in my country." While laughing he said, "I want Europeans to take me to their countries so that I will be in peace, at least while dying."

In a street of the camp, young people who were sitting together and chatting invited the team and offered water, adding that they only have water.
One of them was a teacher at a primary school, another had recently become a construction engineer and another was studying medicine.
The young people said they have already lost their hopes for a brighter future in their country and believed that everything was deteriorated due to the U.S. invasion, Baghdad administration and de facto division of the country, namely Sunni, Shiite and Kurdish regions. One of them with an excited voice said, "Where is the U.S., the U.N., the developed countries? Turkey is the only country, taking care of us. Not Germany, not Switzerland, not Belgium, but Turkey. The camp officials are doing their best for us. They treat us as if we are their sons. But how long will it last? We do not want to stay trapped in this camp."

Many of the young people as well as some of the elderly had a common demand saying that they want to immigrate to any European country since they feel like there is nothing that they can do. They touch on a truth, which is that although the Turkish government does its best effort to respond to the Yazidis' needs, the well-educated people do not want their life to continue in a refugee camp but want to work and exhibit their talents. However, Turkish officials said it is impossible for Turkey to grant them citizenship as the government expects them to return to their homeland when the threat ends. Young Yazidis seemed determined not go back to Iraq and find a way to leave the camp to either work in Turkey or go to Europe.

After having a conversation with these young people, the team wanted to meet a religious leader as the community is headed by sheikhs. They took the team to a tent where a 50-year-old sheikh welcomed the team.

Sheikh Ibrahim brought out a thick book, one of the Yazidi holy books. He said the book has been written in Kurdish and Hoda (God) revealed the passages to the saints. He said he wanted to read a passage after being asked what the essence of the Yazidi faith is. The passage read: "Love the people who are the subjects of God, never treat them badly as it may hurt God, respect people as it means respecting God as well."

When asked about their relation with Muslims he read another passage: "Moses, Jesus and Muhammad have been made responsible for spreading God's message. Respect them." He added that they do not believe that Muhammad is the last prophet as Muslims do. He said they had no problem with any religion and had peaceful beliefs, ordering to treat everyone equally. He added, "But we Yazidis have been subjected to 74 massacres in our history just because we preserve our religion." When asked about the Kurdistan Regional Government (KRG) and other Kurdish Muslims, he said, "There is no difference between ISIS militants and them for us, as they also have been expecting us to be converted to Islam for centuries." He added, "We have established very good relations with Muslims, especially with Turkmens. But when ISIS invaded our city, everything changed. I do not understand why we are enemies." When their view on Turkey was asked referring to the fact that Turkey is also a Muslim country and has a conservative government at the moment, the sheikh smiled and said, "We heard that a new Turkey [referring to the President Recep Tayyip Erdoğan's rhetoric] is being established.

We have had bad experiences also in Turkey, especially in the era of Mustafa Kemal Atatürk [the founder of the modern Turkish Republic]. But we witness that Turkey has changed and become democratized. The Turkish people welcome us, do their best and we appreciate their help."
While leaving the camp it was visible that there was concern in the eyes of the people as they had no idea what was waiting for them the next morning.