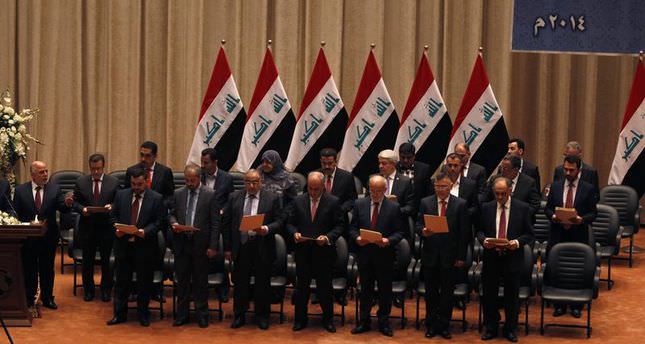 by AA Sep 09, 2014 12:00 am
A new Iraqi government led by Prime Minister Haider Al-Abadi has officially been formed after it received a vote of confidence in the Iraqi parliament.

The new government, which includes Sunni, Kurdish and Shiites deputies, was approved by 177 votes out of 280 in the parliament on Monday.

After a long debate, 17 ministries were given to Shiites, seven to Sunnis, and four to Kurds, while one ministry was given to minorities.

Some important ministries such as petroleum, interior and foreign were handed to Shiites.

Appointments to interior and defense ministerial posts were not named, but Abadi pledged to do so within a week.

Iraqi Kurds gained 62 seats in the parliament but their participation was "conditional", officials said, in that if the new government fails to fulfill Kurdish demands they have to withdraw from government within three months.


Masum then assigned Abadi to form a unity government.

Turkish PM Ahmet Davutoğlu called Abadi to congratulate him right after his assignment to duty and expressed Turkey's support to the new government.