UN warns of grave violations against children in Gaza war 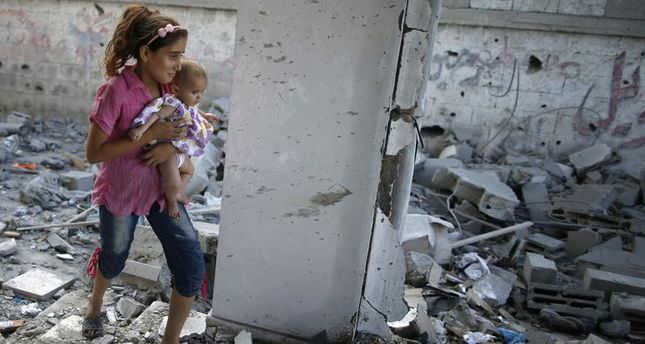 by Daily Sabah Sep 09, 2014 12:00 am
Addressing the U.N. Security Council on the situation of children in heavy armed conflict, the special representative of the U.N. Secretary General for Children and Armed Conflict, Leila Zerrougui stressed her greater concern over Palestinian children who have been living in a constant state of war. During the Israeli assault on Gaza, a large part of the Palestinian casualties were children.

Presenting the U.N. Secretary General Ban-Ki-moon's latest report on children and armed conflict, Zerrougui called for an investigation of the impact of the Gaza war on children and calling for "perpetrators from all parties to the conflict must be held accountable." During the Gaza war, over 500 children were killed and more than 1,300 injured. Two-thirds of the Palestinian children were under the age of 12 and one-third of the children were permanently disabled, she added. Considering the heavy destruction caused by the Israeli military and the worsening humanitarian crisis in the occupied territory, as the school year started, the Israeli shelling targeted at least 244 schools, including 75 U.N. Relief and Works Agency for Palestine Refugees in the Near East (UNRWA) schools that were used as shelters for many displaced Palestinians. As thousands of displaced families are still living in the schools, access to education for the children of Gaza is severely limited.

"We cannot afford impunity in the face of such grave violations of international law that in some cases may amount to war crimes," Zerrougui said.

The region has long been suffering from the increasing armed conflicts and the serious threats posed by the radical extremist militants such as the Islamic State of Iraq and al-Sham (ISIS) militants and Boko Haram in Nigeria.

Since the Gaza war broke out on July 8, the Palestinian death toll reached at least 2,145. The number includes 261 women and 102 elderly people, according to the Palestinian health ministry.