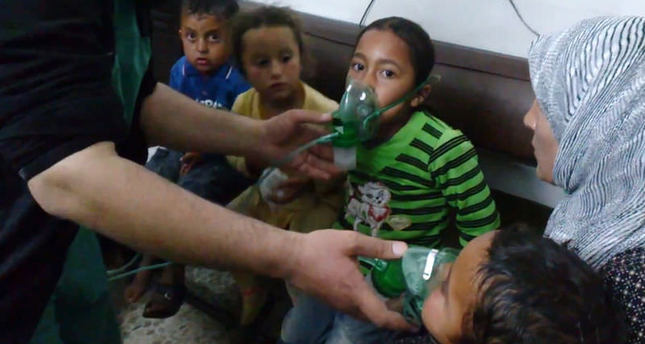 by Daily Sabah Sep 11, 2014 12:00 am
Evidence of chlorine gas attack on villages in northern Syria has been reported by an international chemical watchdog agency. The Organization for the Prohibition of Chemical Weapons (OPCW) said the report released by the Fact Finding Mission (FFM) has confirmed that chlorine, a toxic industrial gas, was used in attacks on the villages of Talmanes, Al Tamanah and Kafr Zeta. The report asserts that there is "a high degree of confidence that chlorine, pure or in mixture, is the toxic chemical in question." The fact finders went to Syria in May to investigate reports of attacks and continued its mission through dozens of interviews with victims, physicians, eye-witnesses and others.

According to the OPCW reports, nearly 97 percent of chemical weapons have been destroyed so far. The OPCW, an inter-governmental organization located in The Hague, is responsible for the destruction of chemical weapons, as well as the prevention of their re-emergence. Many states bound by the Chemical Weapons Convention (CWC) to destroy chemical weapons are obliged to place the highest priority on the safety of people and on protecting the environment.

Albania, India and a third country, which does not want to be named, have completed the destruction. Russia and the U.S. are currently in the process of removing of all their chemicals. According to 2014 data, in total 18 percent of the chemicals remain undestroyed.