Is Iraq becoming part of a Commonwealth? 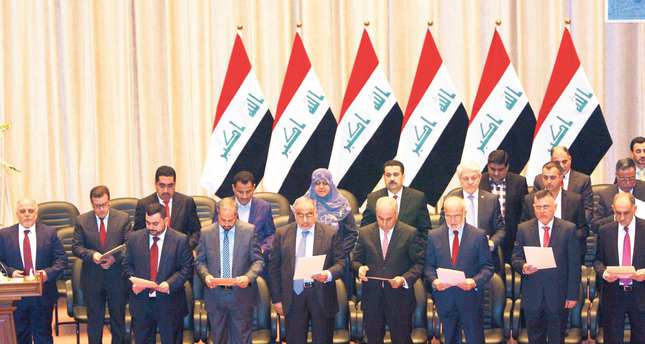 Iraq, a country which has been seeking political and economic stability for more than a decade, is on the verge of new period stemming from unsatisfactory cabinet members' controversial dual-citizenship issues

The recently-elected Iraqi President Fuad Masum appointed Prime Minister Haidar al-Abadi to form the new government after former Prime Minister Nouri al-Maliki, who was accused of enforcing a sectarian political agenda that targeted Sunni people in Iraq, left his post on Aug. 14 once he lost support in the Iraqi parliament and in his own Islamic Dawa Party.

However, the new cabinet formed by Haidar al-Abadi, who is also from the Islamic Dawa Party, is not expected to terminate the political crisis, as Iraqi thinkers, authors and academics have highlight on different channels.

Prominent Iraqi thinkers described the new government forming process with the oft-repeated mantra "old rules, new players, nothing is going to change Iraq." After Haidar al-Abadi announced his cabinet members, Iraqi people who sincerely believe in the people's will made a slight change to the motto and said "old rules, old players, nothing is never gonna change in Iraq."

According to iraqinews.com, Member of Parliament Haider al-Mulla, from the Iraqiya Slate - a political party in Iraq - attributed the objection of the MPs of the State of Law Coalition regarding the prevention of MPs of dual citizenship being nominated for the next parliamentary elections to the possession of 70 percent of them possessing dual citizenships. In a press conference held at the parliament building on July 23, he said, "The political blocs and the members of the Parliamentary Legal Committee agreed upon adding two conditions to the requirements for nomination to the next elections, where the first one is that the nominee must have a bachelor degree and the second one is that the nominee must not have a dual citizenship.

"Due to the objection to the second condition, it was not included in the first reading," he said, adding, "I collected 100 signatures from MPs of different blocs, including the SLC, to include the second condition within the second reading." The Iraqi constitution prevents those who occupy high positions in cabinet to hold foreign citizenship. The fourth clause of article 18 in the Iraqi constitution clearly says everyone who assumes a senior, security or sovereign position must abandon any other acquired citizenship.

This shall be regulated by law. Despite a huge reaction from discreet politicians and NGO leaders, the new Iraqi cabinet was formed by breaking the constitution. Not to mention, Shi'ite Haidar al-Abadi's cabinet includes some political figures who already failed in previous cabinets such as former Minister of Foreign Affairs Hoshiar Zabari, former Prime Minister Ayad Allawi and so on, all of which are British citizens, which raised eyebrows in Iraq.