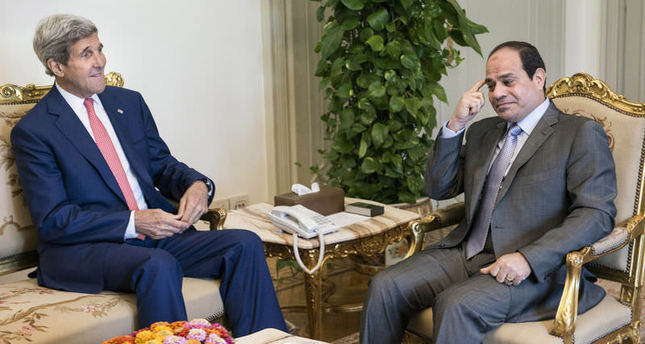 Kerry arrived in Cairo earlier Saturday from Turkey for talks with the Arab League chief and senior Egyptian officials, including President Abdel-Fattah al-Sisi.

Kerry arrived in Cairo earlier Saturday from Turkey for talks with the Arab League chief and senior Egyptian officials, including President Abdel-Fattah al-Sisi.

An Arab League official told Anadolu Agency earlier that Kerry and al-Arabi had discussed efforts aimed at fighting terrorism as well as regional developments, especially the situation in Syria, Libya and Iraq.

Kerry's visit is part of U.S. efforts aimed at forming a broad coalition against the self-proclaimed Islamic State of Iraq and al-Sham (ISIS) militant group, which is now controlling vast chunks of land in both Iraq and Syria.

The U.S. has led efforts to form a regional and international coalition to fight the threat to the Middle East posed by the group.

Since early last month, the U.S. has carried out a total of 143 airstrikes across Iraq against sites said to be held by the ISIS.

Kurdish Peshmerga fighters and Iraqi government troops – backed by U.S. air support – are said to have recently made slow but steady progress in areas under the group's control.