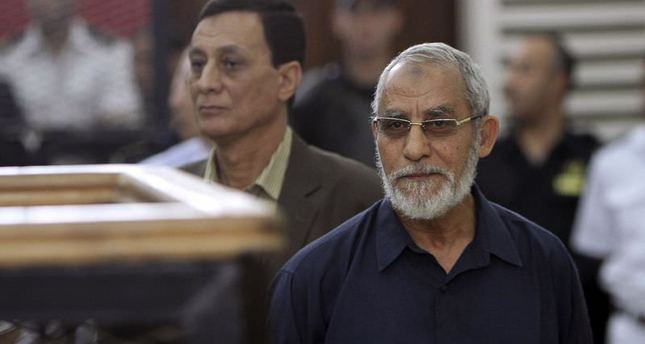 by Daily Sabah Sep 15, 2014 12:00 am
An Egyptian court sentenced the leader of the Muslim Brotherhood, Mohamed Badie, and another 14 members to 25 years in prison for murdering six people and inciting violence. The session on Monday was meant to be so the jury could hear witness statements but the judge issued a verdict before the statements were heard. The Cairo court sentenced Badie and 14 other Islamic leaders, including the Brotherhood's Essam al-Erian and Mohamed al-Beltagy, to life imprisonment for inciting deadly clashes in July 2013 in a western district of the capital. A life sentence in Egypt is 25 years in prison. The 71-year-old Badie has already been sentenced to life on two separate occasions as well as receiving a death sentence, along with 182 others, for inciting a violent clash in which two people were killed last August.

Badie is one of thousands of Muslim Brotherhood figures and supporters who have been arrested in a deadly crackdown following the overthrow of the first democratically elected president Mohammed Morsi by the incumbent President Abdel-Fattah el-Sissi. The case against Badie springs from an attack against a police station near the southern city of Minya on Aug. 14, when a policeman and a civilian were killed. The attack was a reprisal after police killed hundreds of people during the dispersal of a sit-in in Cairo by supporters of Morsi. The Brotherhood has been called a "terrorist organization" by the Egyptian authorities. His supporters have organized demonstrations against persistent military-backed government violence, which has often led to clashes.

In March, the same court that sentenced Badie to death was at the center of an international outcry when the court handed out death sentences to 529 alleged Morsi supporters. The judge subsequently confirmed 37 of these sentences and commuted the rest to life in prison. Morsi has been in prison since he was ousted and is on trial for inciting the killing of opposition demonstrators in December 2012 in front of the presidential palace.
The ousted president also faces charges of espionage, in collaboration with the Palestinian Hamas movement. The government crackdown against Morsi supporters since his abduction has led to the killing of at least 1,400 people while 15,000 have been imprisoned.