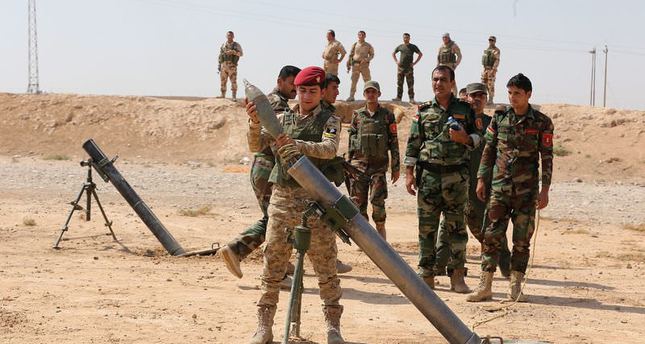 by Sep 16, 2014 12:00 am
Kurdish peshmerga forces on Tuesday recaptured seven Christian villages in northern Iraq in clashes with ISIS militants, an officer and a cleric said.

Tens of thousands of Iraqi Christians, most of them Chaldeans, fled their homes when ISIS militants launched a renewed drive in the north in early August.

Iraq's largest Christian town, Qaraqosh, and dozens of other villages were all but emptied in what Christian leaders described as the worst disaster for the minority in centuries.

On Tuesday, peshmerga forces ousted ISIS militants from seven villages west of the Kurdish capital Arbil during fighting in which rockets and mortar rounds were used, a senior officer said.

"We liberated those villages with the support of US aircraft," Major Sardar Ali said, referring to the Nineveh plains area between Arbil and Mosul, the main IS hub in Iraq.

The United States, whose air force has been targeting ISIS militants in the area since early August, has yet to confirm it carried out the latest reported strikes.

The officer said many of the homes were booby-trapped by the militants before they retreated.

The peshmerga, the main security forces of the autonomous Kurdish region of northern Iraq, are receiving arms and ammunition from countries including the United States and France.

A source in the Catholic Chaldean church told AFP that Kurdish forces had made progress Tuesday.

"The peshmerga managed to liberate several villages... (ISIS) militants have now fled from there," the cleric said on condition of anonymity.

The villages were important because of their location close to the towns of Bartalla and Qaraqosh, he added.

ISIS fighters on June 9 launched an offensive that saw them seize the second city of Mosul and sweep through much of Iraq's Sunni heartland in a matter of days.

In another push in early August, they targeted minority groups, took control of the country's largest dam and moved within striking distance of Arbil.

That prompted Washington to send warplanes back into the skies over Iraq for a bombing campaign to support efforts by Kurdish and federal forces to recapture lost ground.