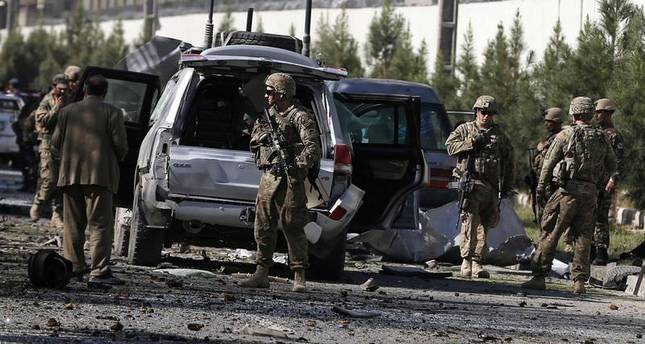 by Sep 16, 2014 12:00 am
A suicide car bomber killed four foreign troops in an attack on a convoy near the U.S. embassy in Kabul on Tuesday, the NATO-led coalition said, one of the worst attacks on international forces in the Afghan capital in months.

The attack near the heavily fortified embassy comes amid a months-long political stalemate and an emboldened insurgency, with a presidential election still unresolved as most foreign combat troops prepare to leave by the end of the year.

The Taliban claimed responsibility for the attack on the main road leading to Kabul's international airport, not far from the sprawling U.S. embassy compound that is also home to other members of the NATO-led International Security Assistance Force (ISAF) coalition.

There was no immediate word on any Afghan casualties.

In a text message sent to journalists, a Taliban spokesman said the suicide bomber, identified only as Bilal, had been lying in wait for foreign troops in a car packed with explosives.

The blast tore through cars and shattered shop windows on the road a few hundred metres from the main embassy gate.

A Reuters photographer said he saw coalition troops carrying four bodies wrapped in black plastic back into their base.

Another Reuters witness reported seeing the body of one foreigner in a uniform lying on the ground while other coalition troops cordoned off the area and rushed to help the wounded.

Ambulances arrived within minutes of the blast during the morning rush hour at about 8 a.m. local time (0330 GMT).

"It was a huge blast," said wounded bystander Haji Awal Gul, his shirt splattered with blood as he stood on the roadside.

Tensions have been building in Afghanistan since the disputed run-off vote in a presidential election in June, with rival candidates still arguing over the outcome despite U.S. efforts to broker a compromise deal.

Taliban insurgents have been exploiting the uncertainty, launching bombings and attacks on government security forces and officials across Afghanistan.

In western Herat province, one U.S. soldier was killed when an unidentified member of the Afghan security forces turned on his trainers late on Monday, the latest incident in a string of "green-on-blue" attacks.

A Western official, who asked not to be identified, said the U.S. soldier was killed when the Afghan threw a hand grenade at his trainers.

ISAF did not confirm the exact details of the attack. An ISAF statement on Tuesday said the U.S. service member was killed when an individual wearing an Afghan army uniform "turned his weapon against ISAF members".

One of the attackers detonated explosives he was carrying while the other was killed in an ensuing gunbattle, the report on TOLOnews.com quoted Afghan officials as saying.