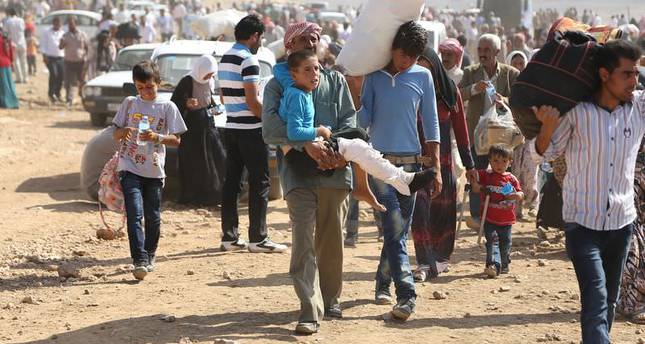 by Anadolu Agency Sep 20, 2014 12:00 am
Tens of thousands of Syrian Kurds have crossed into Turkey since Friday, fleeing an advance by the self-proclaimed Islamic State of Iraq and Sham (ISIS) fighters who have seized dozens of villages close to the border, Turkish Deputy Prime Minister Numan Kurtulmuş said on Saturday.

Turkey opened a stretch of the frontier on Friday after Kurdish civilians fled their homes, fearing an imminent ISIS attack on the border town of Ayn al-Arab, known as Kobani in Kurdish.

"Around 45,000 Syrian Kurds have crossed the border as of now from eight entrance points along a 30-km distance from Akçakale to Mürşitpınar, just across the border from Kobani, since we opened the border yesterday. We accommodated them in the newly-built tents near the border." Kurtulmuş told the reporters. He updated the number to 60,000 later in Saturday.

Kurtulmuş added: "In no other place in the world, no country, regardless how good their economic conditions are, could accommodate some 45,000 refugees at one time. This shows the strength and good intentions of Turkey."

Turning to the amount of humanitarian aid that Turkey provides in Syria and to Syrian refugees, Deputy PM Kurtulmuş highlighted Turkey's position as the world's third biggest aid donor, and stated "Turkey had been ready for an even worse-case scenario: a flow of up to 100,000 people."

ISIS's advances in northern Syria have prompted calls for help by the region's Kurds who fear an impending massacre in the town of Kobani, which sits in a strategic position close to the Turkish border.

At least 18 ISIS fighters were killed in clashes with Syrian Kurds overnight as the militant group took control of more villages around the town, according to the Syrian Observatory for Human Rights, which monitors the war.

Iraqi Kurdish leader Masoud Barzani called on Friday for international intervention to protect Kobani from the ISIS advance, saying the insurgents must be "hit and destroyed wherever they are".

The United States is drawing up plans for military action in Syria against the ISIS group which has seized swathes of territory in Syria and Iraq.

"The UN must act urgently to deal with the growing refugee crisis in the region," Çavuşoğlu told reporters Friday following a UN Security Council meeting on Iraq.

"We cannot close the door on people fleeing from the oppressive Syrian regime or the pressure and attacks of other groups," he said.

Currently, there are around 1,2 million Syrian refugees in Turkey.

"This number will keep increasing unless stability is restored in Iraq and Syria," Çavuşoğlu said.

The United Nations has praised Turkey's actions in opening a section of its border with Syria to allow fleeing Kurds to cross to safety as "right and humane."

In a statement late on Friday, the UN High Commissioner for Refugees (UNHCR) said: "UNHCR applauds Turkey's prompt action in ensuring safe haven for and extending support to Syrian-Kurdish civilians seeking to cross its borders from new fighting in northern Syria in the area around the town of Ayn Al-Arab."

The refugee agency reported that the city was surrounded on three sides by militants and voiced concerns over possible further displacement in the coming days.

Amin Awad, UNHCR Middle East director, said: "It is of life-saving importance that these people have access to safe haven."

"Turkey is already hosting a very substantial population of Syrian refugees and its capacities are being tested. Its actions today in ensuring that borders are open to people fleeing the latest violence was right and humane in a very difficult situation." Awad said.