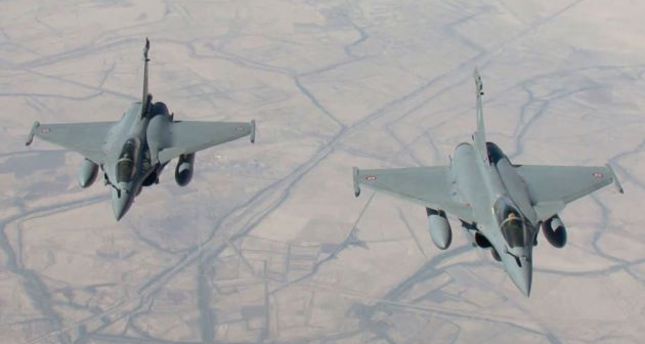 by Daily Sabah Sep 20, 2014 12:00 am
As part of a joint military action against violent Islamic State of Iraq and al-Sham (ISIS) militants, France launched airstrikes for the first time against ISIS, targeting "non-moving" assets in northeastern Iraq on Friday morning, the French Presidency office confirmed. "This [Friday] morning at 9:40 a.m., our air-forces conducted the first strike against a supply depot," said French President François Hollande in a statement.

The French Rafale warplanes, which are based at Al-Dhafra in the United Arab Emirates, conducted the first airstrikes and "completely destroyed" the target, the statement said. France would continue further operation with no intention to deploy military ground forces in Iraq. "France is to respond positively to the Iraqi authorities by carrying out air strikes against the militants there. We will not go beyond that. There will not be ground troops, and we will only intervene in Iraq," President Hollande said in a statement. France, as well as Britain, had already sent aircraft to Iraq for reconnaissance missions.

Yet, Friday's strike was France's first offensive operation against militants. France hosted an international conference on the coordination of a global strategy against ISIS, which controls large swathes of territories in Northern Iraq and Syria. Leaders from 29 countries, including the five U.N. Security Council permanent members, met in Paris on Monday to agree to provide the Iraqi government with military aid to defeat ISIS militants.
Last Update: Sep 21, 2014 4:13 pm
RELATED TOPICS