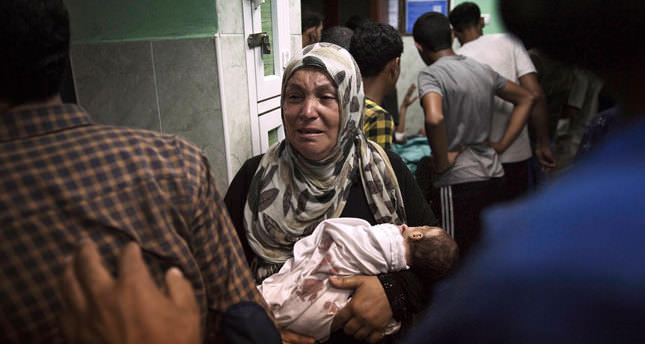 by Zeynep Doğusan Sep 20, 2014 12:00 am
As Gazans struggle to rebuild their cities and return to their daily lives, violations of their human rights by Israel still complicate the situation. During and after the war, Palestinians in Gaza, the occupied West Bank and Palestinian Israeli citizens faced discrimination. The Israeli attack on Gaza lasted 51 days and left the enclave in ruins. After the cease-fire, the expectation for a two-state solution still exists although the details of a peace process have not yet been negotiated.

The HaMoked Center for the Defence of the Individual human rights organization assisting Palestinians under occupation declared that the number of Gaza detainees kept during the Israeli onslaught remains uncertain. Given the chaos created by Israel's offensive, it is difficult for families to determine whether a missing relative has been buried under rubble or detained. Since the beginning of the attacks Israeli authorities have banned family visits to Palestinian prisoners identified with Hamas. HaMoked emphasized that family visits to Palestinian prisoners who were incarcerated in Israel is not a "privilege," but rather a fundamental right.

The food sector in Gaza is trying to fix the damages from the war. Israel is still keeping the fishing sector in the Gaza Strip under pressure. Gazan fishing boats are allowed to venture up to six nautical miles offshore with a possibility to extending it to 12 miles according to the ceasefire agreement. Issa al-Sharafi, a fisherman from Gaza told Al-Monitor, "Don't believe anyone who tells you that the fishermen's situation has changed or that the cease-fire agreement has reduced their accumulated debt. Those were just empty words and media talk. We cannot go past the 5-mile [limit], and sometimes we cannot even go beyond four." Palestinian Health Ministry spokesman Ashraf al-Qodra told Anadolu Agency (AA) that a 69-year-old Palestinian fisherman "was moderately injured after Israeli gunboats opened fire on Gazan fishermen at sea late Wednesday night." The firing on boats of some fishermen last week and arrest of four could also be counted as the tightening of fishermen's conditions in Gaza.

While the rebuilding of Gaza cannot proceed because of the ongoing Israeli blockade, displaced Gazans are still living in schools. According to a U.N. agency, around 9,600 students were not able to start the new academic year in the Gaza Strip last Sunday because families living in the schools refuse to leave. Not only the civilian infrastructure but also the cultural heritage of Gaza was damaged by the attacks. The Israeli airstrikes damaged 203 mosques, of which 73 were destroyed completely. Two churches were also damaged according to the Palestinian Ministry of Endowments and Religious Affairs. Many of the damaged historical sites date back to the time of the first Islamic caliphs, the Ottoman Empire and the Mamluk Sultanate. By targeting religious and cultural sites, Israel violated an international humanitarian law, the Hague Convention of 1954 for Protection of Cultural Property. Under this convention, all feasible precautions must be taken to avoid damage to cultural property in cases of war.

Besides the damage in Gaza, Palestinian Israeli citizens are discriminated against in various spheres of daily life. Demonstrations by Palestinians against the Israeli attack were violently stopped and freedom of thought was restricted. Members of the Knesset who represent the Arab minority (about 20 percent of the Israeli population) were thrown out of parliamentary hearings for daring to oppose the war. Member of the Knesset Hanin Zoabi of the Balad party was even barred from the session discussions for the next six months - the harshest punishment ever placed on a member by the Knesset Ethics Committee. Racist statements have also increased on Israeli social media sites, in which Palestinian Israeli citizens have been called "traitors."

The Israeli Supreme Court Wednesday upheld a discriminatory law called the Admissions Committees Law, allowing the admissions committees in 434 communities in the Negev and the Galilee (about 43 percent of all towns in Israel) to reject housing applicants based on their "social suitability" and the communities' "social and cultural fabric." The court dismissed various petitions filed by human rights groups against the law enacted by the Knesset in 2011, claiming that it could not determine if the law violated constitutional rights. "Acceptance committees" in small localities, are tools used to maintain segregation between Jews and Muslims as well as keeping up various other "undesirables." According to HaMoked, Palestinians living in the occupied West Bank face much deeper discrimination.

The group's report on 7,500 Palestinians live in the Seam Zone, the area between the separation barrier and the Green Line, demonstrates the bureaucratic obstacles they encounter. Palestinian residents of the villages in the Seam Zone must apply for a permit to allow them to live on land that has been theirs for generations and they are not allowed to move freely without the permits.
Last Update: Sep 20, 2014 1:23 am
RELATED TOPICS