US seeks further assistance from Turkey against ISIS, Kerry says 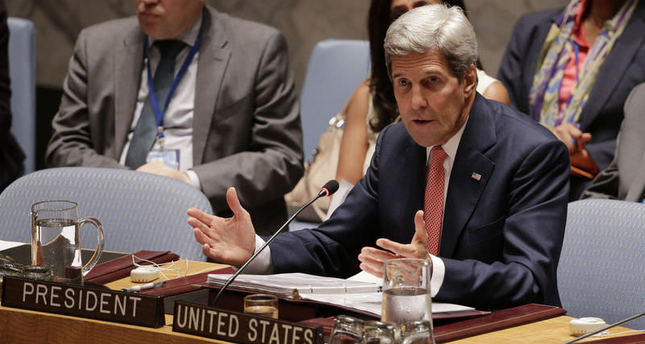 by Daily Sabah with Agencies Sep 22, 2014 12:00 am
The United States expects Turkey to step up in the fight against the self-proclaimed Islamic State of Iraq and al-Sham (ISIS) now that Turkey has secured the release of 49 hostages held by the militants, the U.S. Secretary of State John Kerry said on Monday.

The hostages — 46 Turks and three Iraqis — were returned to Turkey on Saturday after more than three months in the hands of the ISIS, which captured them when it overran the Iraqi city of Mosul in June.

Turkey, a U.S. ally and member of the NATO military alliance, has made commitments at various regional conferences to help in the effort against ISIS but the help has been limited so far because "they first needed to deal with their hostage situation," Kerry said in an appearance on MSNBC.

After Turkey saved the lives of its abducted citizens, circles close to the Turkish government and political experts state that the stance of Turkey will not change as the hostage crisis was not the only point that prevented it from joining a military action.

According to foreign policy experts, Turkey to involve in any armed coalition against ISIS could lead to an influx of extremist militants into the country which could harm its relations with non-ISIS people of neighboring countries. Such people could get killed in armed attacks and would harm the overall trust it gained from the people of Middle East by taking a position next to Western powers.