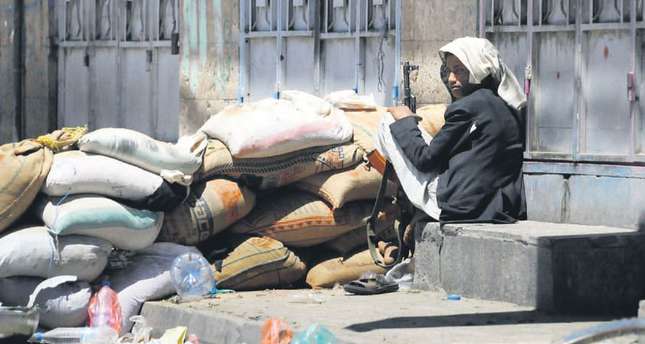 by Daily Sabah Sep 23, 2014 12:00 am
The Yemeni government and Shiite Houthi rebels have signed a U.N.- brokered peace deal in capital Sanaa, allowing the implementation of the national dialogue conference results to go ahead.

The first step to ending the political crisis Yemen has long been suffering from was taken after a peace agreement was signed yesterday between the Yemeni government and Shiite Houthi rebels . After days of violent conflict that has left more than 140 people dead and caused many to flee their homes, the U.N.-brokered peace deal was signed in the capital Sanaa in the presence of Yemen's political parties and the United Nations Advisor for Yemeni affairs Jamal Benomar, Yemen's President Abd-Rabbu Manasour Hadi and Houthi rebels. "This agreement forms a way ahead toward implementing the outcomes of the national dialogue conference and a win over all challenges which require all involved parties to execute it in an accurate way. It will also immediately end the gunfire be it in the capital Sanaa or other governorates," President Hadi said, stressing the need for urgent action to end the political crisis.

The peace agreement calls for the formation of a new technocratic government within one month and an economic committee in order to alleviate the economic suffering of Yemenis. The appointment of a Houthi advisor to the president will also be arranged.

Following the Yemeni government's call for the withdrawal of rebel groups from the places they have seized in Sanaa, the Houthi rebels reportedly handed over various state institutions they seized in the capital, including the Defense Ministry, the central bank, a key military base and Iman University. The rebels' withdrawal from state institutions took place on late Sunday under the supervision of Yemen's Minister of Defense Gen. Mohamed Nasser Ahmed, Anadolu Agency (AA) reported.

This proves that there has been an apparent easing of tensions in the Yemeni capital after the peace deal was signed. However, the rebels still refuse to exit the capital city.

Yemen has long been suffering from political instability and insecurity due to threats posed by the various militant groups. In addition to the Houthi rebels, Yemen's local al-Qaida branch would also pose a significant security threat to the Yemeni government, as the militants have tried to impose control over many cities.

The Houthis have been fighting Sunni militias who allied themselves with the Islah Party or the Yemeni government. As the rebels want to acquire a fair share of power in the parliament, the change in the government's stance symbolized by the peace deal would likely ease the current conflict
between the government and the rebels.
Last Update: Sep 23, 2014 10:12 am
RELATED TOPICS