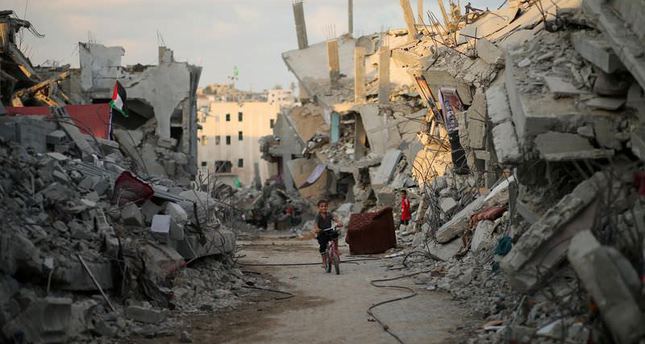 by AA Sep 23, 2014 12:00 am
Indirect talks for a permanent cease-fire arrangement between Palestinian and Israeli negotiators kicked off in Cairo on Tuesday.

Head of the Palestinian delegation, Azzam al-Ahmad, told the Turkish press agency AA that delegation members would meet with mediators from the Egyptian intelligence apparatus to set the agenda for the talks.

Negotiations are expected to resume in earnest early next month following the Muslim Eid al-Adha and Jewish holidays.

Representatives of Palestinian factions Fatah and Hamas will also meet Wednesday for "reconciliation dialogue" aimed at easing tensions that have flared up recently between the rival groups.

Palestinian and Israeli negotiators hammered out an Initial cease-fire deal on August 26 under Egyptian mediation, following 51 days of all-out Israeli attacks on the blockaded Gaza Strip.

Over the course of Israel's offensive, initially launched with the stated aim of ending rocket fire from Gaza, at least 72 Israelis-67 soldiers and five civilians-were killed, according to Israeli figures.

The second round of negotiations is now expected to focus on outstanding issues from the first round of talks. These include core Palestinian demands, such as the release of Palestinian prisoners held by Israel and construction of an airport and seaport in Gaza.

On the inter-Palestinian front, tensions have mounted recently between Hamas and Fatah, the latter of which is led by Palestinian Authority President Mahmoud Abbas.

Rifts have emerged in spite of a June reconciliation deal that produced a unity government headed by West Bank-based Prime Minister Rami al-Hamdullah.

The unity government has yet to assume full control of the Hamas-run Gaza Strip. Both factions, meanwhile, continue to accuse each other of attempting to derail the reconciliation deal.

The deal ended seven years of division between the two factions, which had led to the establishment of two separate seats of government-Fatah in the West Bank and Hamas in Gaza-after the latter routed pro-Fatah troops in 2007 and assumed control of the Gaza Strip.